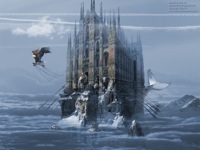 b : a persistent false psychotic belief regarding the self or persons or objects outside the self that is maintained despite indisputable evidence to the contrary; also : the abnormal state marked by such beliefs

A delusion, in everyday language, is a fixed belief that is either false, fanciful, or derived from deception. Psychiatry defines the term more specifically as a belief that is pathological (the result of an illness or illness process). As a pathology, it is distinct from a belief based on false or incomplete information, dogma, stupidity, apperception, illusion, or other effects of perception.

Delusions typically occur in the context of neurological or mental illness, although they are not tied to any particular disease and have been found to occur in the context of many pathological states (both physical and mental). However, they are of particular diagnostic importance in psychotic disorders and particularly in schizophrenia, paraphrenia, manic episodes of bipolar disorder, and psychotic depression.

Although non-specific concepts of madness have been around for several thousand years, the psychiatrist and philosopher Karl Jaspers was the first to define the three main criteria for a belief to be considered delusional in his 1917 book General Psychopathology. These criteria are:

These criteria still continue in modern psychiatric diagnosis. The most recent Diagnostic and Statistical Manual of Mental Disorders defines a delusion as:

A false belief based on incorrect inference about external reality that is firmly sustained despite what almost everybody else believes and despite what constitutes incontrovertible and obvious proof or evidence to the contrary. The belief is not one ordinarily accepted by other members of the person's culture or subculture.

There is controversy over this definition, as 'despite what almost everybody else believes' implies that a person who believes something most others do not is a candidate for delusional thought. Furthermore, it is ironic that, while the above three criteria are usually attributed to Jaspers, he himself described them as only 'vague' and merely 'external'. He also wrote that, since the genuine or 'internal' 'criteria for delusion proper lie in the primary experience of delusion and in the change of the personality [and not in the above three loosely descriptive criteria], we can see that a delusion may be correct in content without ceasing to be a delusion, for instance - that there is a world-war.'