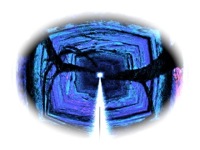 Imagination is the faculty of imagining, or of forming mental images or concepts of what is not actually present to the senses, and the action or process of forming such images or concepts. It helps provide meaning to experience and understanding to knowledge; it is a fundamental facility through which people make sense of the world, and it also plays a key role in the learning process. A basic training for imagination is the listening to storytelling (narrative),(see Northrup Frye) in which the exactness of the chosen words is the fundamental factor to 'evoke worlds'.

Imagination is the faculty through which we encounter everything. The things that we touch, see and hear coalesce into a "picture" via our imagination. The way we understand things... the way that we 'make sense' of things is through our imagination. The ability to problem-solve... to see things from a different perspective... to empathize... all happen because we have this technicolor, multi-channel, curious imagination.

For lessons on the topic of Imagination, follow this link.

It is accepted as the innate ability and process to invent partial or complete personal realms within the mind from elements derived from sense perceptions of the shared world. The term is technically used in psychology for the process of reviving in the mind, perception of objects formerly given in sense perception. Since this use of the term conflicts with that of ordinary language, some psychologists have preferred to describe this process as "imaging" or "imagery" or to speak of it as "reproductive" as opposed to "productive" or "constructive" imagination. Imagined images are seen with the "mind's eye".

Imagination can also be expressed through stories such as fairy tales or fantasies. Most famous inventions or entertainment products were created from the inspiration of one's imagination.

One hypothesis for the evolution of human imagination is that it allowed conscious beings to solve problems (and hence increase an individual's fitness by use of mental simulation.

The common use of the term is for the process of forming in the mind new images which have not been previously experienced, or at least only partially or in different combinations. Some typical examples follow:

Imagination in this sense, not being limited to the acquisition of exact knowledge by the requirements of practical necessity, is, up to a certain point, free from objective restraints. The ability to imagine one's self in another person's place is very important to social relations and understanding. Albert Einstein said, "Imagination…is more important than knowledge. Knowledge is limited. Imagination encircles the world."

In various spheres, however, even imagination is in practice limited: thus a person whose imaginations do violence to the elementary laws of thought, or to the necessary principles of practical possibility, or to the reasonable probabilities of a given case is regarded as insane.

The same limitations beset imagination in the field of scientific hypothesis. Progress in scientific research is due largely to provisional explanations which are constructed by imagination, but such hypotheses must be framed in relation to previously ascertained facts and in accordance with the principles of the particular science.

Imagination is an experimental partition of the mind used to create theories and ideas based on functions. Taking objects from real perceptions, the imagination uses complex IF-functions to create new or revised ideas. This part of the mind is vital to developing better and easier ways to accomplish old and new tasks. These experimented ideas can be safely conducted inside a virtual world and then, if the idea is probable, and the function is true, the idea can be actualized in reality. Imagination is the key to new development of the mind and can be shared with others, progressing collectively.

Imagination differs fundamentally from belief because the subject understands that what is personally invented by the mind does not necessarily impact the course of action taken in the apparently shared world while beliefs are part of what one holds as truths about both the shared and personal worlds. The play of imagination, apart from the obvious limitations (e.g. of avoiding explicit self-contradiction), is conditioned only by the general trend of the mind at a given moment. Belief, on the other hand, is immediately related to practical activity: it is perfectly possible to imagine oneself a millionaire, but unless one believes it one does not, therefore, act as such. Belief endeavours to conform to the subject's experienced conditions or faith in the possibility of those conditions; whereas imagination as such is specifically free. The dividing line between imagination and belief varies widely in different stages of technological development. Thus someone from a primitive culture who ill frames an ideal reconstruction of the causes of his illness, and attributes it to the hostile magic of an enemy based on faith and tradition rather than science. In ignorance of the science of pathology the subject is satisfied with this explanation, and actually believes in it, sometimes to the point of death, due to what is known as the nocebo effect.

It follows that the learned distinction between imagination and belief depends in practice on religion, tradition, and culture.

Imagination as a reality

The world as experienced is an interpretation of data arriving from the senses, as such it is perceived as real by contrast to most thoughts and imaginings. This difference is only one of degree and can be altered by several historic causes, namely changes to brain chemistry, hypnosis or other altered states of consciousness, meditation, many hallucinogenic drugs, and electricity applied directly to specific parts of the brain. The difference between imagined and perceived reality can be so imperceptible as to cause acute states of psychosis. Many mental illnesses can be attributed to this inability to distinguish between the sensed and the internally created worlds. Some cultures and traditions even view the apparently shared world as an illusion of the mind as with the Buddhist maya or go to the opposite extreme and accept the imagined and dreamed realms as of equal validity to the apparently shared world as the Australian Aborigines do with their concept of dreamtime.

Imagination, because of having freedom from external limitations, can often become a source of real pleasure and unnecessary suffering. A person of vivid imagination often suffers acutely from the imagined perils besetting friends, relatives, or even strangers such as celebrities. Also crippling fear can result from taking an imagined painful future too seriously.

Imagination can also produce some symptoms of real illnesses. In some cases, they can seem so "real" that specific physical manifestations occur such as rashes and bruises appearing on the skin, as though imagination had passed into belief or the events imagined were actually in progress.

It has also been proposed the whole of human cognition is based upon imagination. That is, nothing that we perceive is purely observation but all is a morph between sense and imagination.

"The parable provides for a simultaneous appeal to vastly different levels of mind and spirit. The parable stimulates the imagination, challenges the discrimination, and provokes critical thinking; it promotes sympathy without arousing antagonism."[1]

A philosopher for whom imagination is a central concept is John Sallis. See in particular: