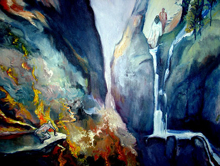 A parable is a brief, succinct story, in prose or verse, that illustrates a moral or religious lesson. It differs from a fable in that fables use animals, plants, inanimate objects, and forces of nature as characters, while parables generally feature human characters.

Some scholars of the New Testament apply the term "parable" only to the parables of Jesus, though that is not a common restriction of the term. Parables such as "Parable of the Prodigal Son" are central to Jesus' teaching method in both the canonical and apocryphal narratives.

For lessons on the topic of Parables, follow this link.

The word "parable" comes from the Greek "παραβολή" (parabolē), the name given by Greek rhetoricians to any fictive illustration in the form of a brief narrative. Later it came to mean a fictitious narrative, generally referring to something that might naturally occur, by which spiritual and moral matters might be conveyed.

A parable is one of the simplest of narratives. It sketches a setting, describes an action, and shows the results. It often involves a character facing a moral dilemma, or making a questionable decision and then suffering the consequences. As with a fable, a parable generally relates a single, simple, consistent action, without extraneous detail or distracting circumstances. Examples of parables are Ignacy Krasicki's Son and Father," "The Farmer," "Litigants" and "The Drunkard."

Many folktales could be viewed as extended parables, and many fairy tales also, except for their magical settings. The prototypical parable differs from the apologue in that it is a realistic story that seems inherently probable and takes place in a familiar setting of life.

A parable is like a metaphor that has been extended to form a brief, coherent fiction. Christian parables have recently been studied as extended metaphors, for example by a writer who finds that "parables are stories about ordinary men and women who find in the midst of their everyday lives surprising things happening. They are not about 'giants of the faith' who have religious visions. Needless to say, "extended metaphor" alone is not in itself a sufficient description of parable; the characteristics of an "extended metaphor" are shared by the fable and are the essential core of allegory.

Unlike the situation with a simile, a parable's parallel meaning is unspoken and implicit, though not ordinarily secret.

The defining characteristic of the parable is the presence of a prescriptive subtext suggesting how a person should behave or believe. Aside from providing guidance and suggestions for proper action in life, parables frequently use metaphorical language which allows people to more easily discuss difficult or complex ideas. In Plato's Republic, parables like the "the Cave" (in which one's understanding of truth is presented as a story about being deceived by shadows on the wall of a cave) teach an abstract argument, using a concrete narrative which is more easily grasped.

In the preface to his translation of Aesop's Fables, George Fyler Townsend defined "parable" as "the designed use of language purposely intended to convey a hidden and secret meaning other than that contained in the words themselves, and which may or may not bear a special reference to the hearer or reader."

Townsend may have been influenced by the contemporary expression, "to speak in parables", connoting obscurity. In common modern uses of "parable," though their significance is never explicitly stated, parables are not generally held to be hidden or secret but on the contrary are typically straightforward and obvious. It is the allegory that typically features hidden meanings. As H.W. Fowler puts it in his book Modern English Usage, the object of both parable and allegory "is to enlighten the hearer by submitting to him a case in which he has apparently no direct concern, and upon which therefore a disinterested judgment may be elicited from him." The parable, though, is more condensed than the allegory: a single principle comes to bear, and a single moral is deduced as it dawns on the reader or listener that the conclusion applies equally well to his own concerns.

Parables are favored in the expression of spiritual concepts. The best-known source of parables in Christianity is the Bible, which contains numerous parables in the Gospels section of the New Testament. Jesus' parables, which are attested in many sources and are almost universally seen as being historical, are thought by scholars such as John P. Meier to have come from mashalim, a form of Hebrew comparison.

Medieval interpreters of the Bible often treated Jesus's parables as detailed allegories, with symbolic correspondences found for every element in the brief narratives. Modern critics regard these interpretations as inappropriate and untenable. Jülicher held that these parables usually are intended to make a single important point, and most recent scholarship agrees.