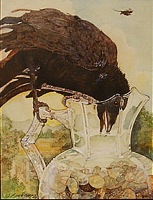 The word "fable" comes from the Latin "fabula" (a "story"), itself derived from "fari" ("to speak") with the -ula suffix that signifies "little": hence, a "little story".

b : a narration intended to enforce a useful truth; especially : one in which animals speak and act like human beings
c : falsehood, lie

A fable is a succinct story, in prose or verse, that features animals, mythical creatures, plants, inanimate objects, or forces of nature which are anthropomorphized (given human qualities), and that illustrates a moral lesson (a "moral"), which may at the end be expressed explicitly in a pithy maxim.

A fable differs from a parable in that the latter excludes animals, plants, inanimate objects, and forces of nature as actors that assume speech and other powers of humankind.

Usage has not always been so clearly distinguished. In the King James Version of the New Testament, "μύθος" ("mythos") was rendered by the translators as "fable" in First and Second Timothy, in Titus and in First Peter.[1]