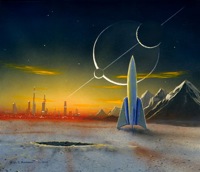 Science fiction is a genre of fiction. It differs from fantasy in that, within the context of the narrative, its imaginary elements are largely possible within scientifically-established or scientifically-postulated laws of nature (though some elements in a story might still be pure imaginative speculation). Exploring the consequences of such differences is the traditional purpose of science fiction, making it a "literature of ideas".[1] Science fiction is largely based on writing entertainingly and rationally about alternate possibilities[2] in settings that are contrary to known reality.

According to science fiction writer Robert A. Heinlein, "a handy short definition of almost all science fiction might read: realistic speculation about possible future events, based solidly on adequate knowledge of the real world, past and present, and on a thorough understanding of the nature and significance of the scientific method."[9] Rod Serling's definition is "fantasy is the impossible made probable. Science Fiction is the improbable made possible."[10] Lester Del Rey wrote, "Even the devoted aficionado– or fan- has a hard time trying to explain what science fiction is", and that the reason for there not being a "full satisfactory definition" is that "there are no easily delineated limits to science fiction."[11]

Forrest J. Ackerman used the term "sci-fi" at UCLA in 1954.[12] As science fiction entered popular culture, writers and fans active in the field came to associate the term with low-budget, low-tech "B-movies" and with low-quality pulp science fiction.[13][14][15] By the 1970s, critics within the field such as Terry Carr and Damon Knight were using "sci-fi" to distinguish hack-work from serious science fiction,[16] and around 1978, Susan Wood and others introduced the pronunciation "skiffy". Peter Nicholls writes that "SF" (or "sf") is "the preferred abbreviation within the community of sf writers and readers".[17] David Langford's monthly fanzine Ansible includes a regular section "As Others See Us" which offers numerous examples of "sci-fi" being used in a pejorative sense by people outside the genre.[18]

As a means of understanding the world through speculation and storytelling, science fiction has antecedents back to mythology, though precursors to science fiction as literature can be seen in Lucian's True History in the 2nd century,[19][20][21][22][23] some of the Arabian Nights tales,[24][25] The Tale of the Bamboo Cutter in the 10th century,[25] Ibn al-Nafis' Theologus Autodidactus in the 13th century,[26] and Cyrano de Bergerac' Voyage de la Terre à la Lune and Des états de la Lune et du Soleil in the 17th century. Following the Age of Reason and the development of modern science itself, Jonathan Swift's Gulliver's Travels[27] was one of the first true science fiction works, together with Voltaire's Micromégas and Kepler's Somnium. This latter work is considered by Carl Sagan and Isaac Asimov to be the first science fiction story. It depicts a journey to the Moon and how the Earth's motion is seen from there.

Following the 18th century development of the novel as a literary form, in the early 19th century, Mary Shelley's books Frankenstein and The Last Man helped define the form of the science fiction novel;[28] later Edgar Allan Poe wrote a story about a flight to the moon.[29] More examples appeared throughout the 19th century.

Then with the dawn of new technologies such as electricity, the telegraph, and new forms of powered transportation, writers like Jules Verne and H. G. Wells created a body of work that became popular across broad cross-sections of society[30] Wells The War of the Worlds describing an invasion of late Victorian England by Martians using tripod fighting machines, equipped with advanced weaponry. It is a seminal depiction of an alien invasion of Earth.

In the late 19th century, the term "scientific romance" was used in Britain to describe much of this fiction. This produced additional offshoots, such as the 1884 novella Flatland: A Romance of Many Dimensions by Edwin Abbott Abbott. The term would continue to be used into the early 20th century for writers such as Olaf Stapledon.

In the early 20th century, pulp magazines helped develop a new generation of mainly American SF writers, influenced by Hugo Gernsback, the founder of Amazing Stories magazine.[31] In the late 1930s, John W. Campbell became editor of Astounding Science Fiction, and a critical mass of new writers emerged in New York City in a group called the Futurians, including Isaac Asimov, Damon Knight, Donald A. Wollheim, Frederik Pohl, James Blish, Judith Merril, and others.[32] Other important writers during this period included Robert A. Heinlein, Arthur C. Clarke, A. E. van Vogt and Stanisław Lem. Campbell's tenure at Astounding is considered to be the beginning of the Golden Age of science fiction, characterized by hard SF stories celebrating scientific achievement and progress.[31] This lasted until postwar technological advances, new magazines like Galaxy under Pohl as editor, and a new generation of writers began writing stories outside the Campbell mode.

In the 1980s, cyberpunk authors like William Gibson turned away from the traditional optimism and support for progress of traditional science fiction.[35] Star Wars helped spark a new interest in space opera,[36] focusing more on story and character than on scientific accuracy. C. J. Cherryh's detailed explorations of alien life and complex scientific challenges influenced a generation of writers.[37] Emerging themes in the 1990s included environmental issues, the implications of the global Internet and the expanding information universe, questions about biotechnology and nanotechnology, as well as a post-Cold War interest in post-scarcity societies; Neal Stephenson's The Diamond Age comprehensively explores these themes. Lois McMaster Bujold's Vorkosigan novels brought the character-driven story back into prominence.[38] The television series Star Trek: The Next Generation began a torrent of new SF shows, of which Babylon 5 was among the most highly acclaimed in the decade.[39][40] Concern about the rapid pace of technological change crystallized around the concept of the technological singularity, popularized by Vernor Vinge's novel Marooned in Realtime and then taken up by other authors.

The National Science Foundation has conducted surveys of "Public Attitudes and Public Understanding" of "Science Fiction and Pseudoscience".[88] They write that "Interest in science fiction may affect the way people think about or relate to science....one study found a strong relationship between preference for science fiction novels and support for the space program...The same study also found that students who read science fiction are much more likely than other students to believe that contacting extraterrestrial civilizations is both possible and desirable (Bainbridge 1982).[89]