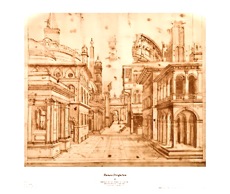 Perspective, in context of vision and visual perception, is the way in which objects appear to the eye based on their spatial attributes, or their dimensions and the position of the eye relative to the objects. There are two main meanings of the term: linear perspective and aerial perspective.

For lessons on the topic of Perspective, follow this link.

As objects become more distant, they appear smaller, because their visual angle decreases. The visual angle of an object is the angle subtended at the eye by a triangle with the object at its base. The greater the distance of the object from the eye, the greater is the height of this triangle, and the less the visual angle. This follows simply from Euclidean geometry.

The Sun and the Moon appear to be roughly the same size because the Sun, although much, much larger, is also much farther away. The relationship between distance and apparent height of objects is not a linear pattern. If an object were actually touching the eye, thus being no distance away, it would appear infinitely tall.

Perspective is also seen in the way the parallel lines of railway tracks appear to meet at a distant point, the vanishing point. This point lies on a line, called the geometrical horizon, at the level of the viewer's eye. Because the Earth's surface is curved, the true horizon (the line dividing the ground and the sky) is lower than this apparent horizon. The difference is imperceptibly small when standing on the surface, but noticeable from great height (a person standing on a mountain can see further than someone at ground level).

In graphic representation, an artist uses intuitive, artistic, scientific, or technical skills to represent the phenomenon of the visual perception of perspective. In simpler terms, these skills are used to add a suggestion of depth to what is ultimately a flat image or drawing.

Forced perspective can be used to deliberately misrepresent an object's size, making something appear larger or smaller than it really is. This is common in film, where a distant castle in the background may in fact only be a cardboard model a few feet high (and much closer to the camera). These are forms of optical illusions.

Perspective in film, television, and computer and video games can include first-person view, third-person view, and other camera field of view effects.