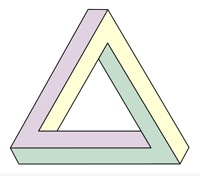 Middle English, from Anglo-French, from Latin triangulum, from neuter of triangulus triangular, from tri- + angulus angle

b : a drafting instrument consisting of a thin flat right-angled triangle of wood or plastic with acute angles of 45 degrees or of 30 degrees and 60 degrees

For lessons on the related topic of Triads and Triunity, follow this link.

A triangle is one of the basic shapes of geometry: a polygon with three corners or vertices and three sides or edges which are line segments. A triangle with vertices A, B, and C is denoted

In Euclidean geometry any three points, when non-collinear, determine a unique triangle and a unique plane (i.e. a two-dimensional Euclidean space).

Triangles can be classified according to the relative lengths of their sides:

In diagrams representing triangles (and other geometric figures), "tick" marks along the sides are used to denote sides of equal lengths – the equilateral triangle has tick marks on all 3 sides, the isosceles on 2 sides. The scalene has single, double, and triple tick marks, indicating that no sides are equal. Similarly, arcs on the inside of the vertices are used to indicate equal angles. The equilateral triangle indicates all 3 angles are equal; the isosceles shows 2 identical angles. The scalene indicates by 1, 2, and 3 arcs that no angles are equal.

Triangles can also be classified according to their internal angles, measured here in degrees.