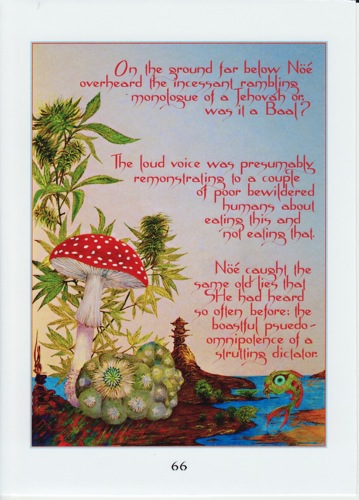 Contemporary cosmologists have long argued as to the exact point in time at which Noe decided to modify the plans so carefully prepared for hir by the computers back on the Great Ship. Some have maintained what little documentation still remains clearly suggests that it was at the moment sHe first saw the two intraterrestrial botanists. Others have theorized that such a radical decision must have taken more serious consideration, especially in light of what occurred later.

The truth, as is often the case, was a mixture of both. Noe had found hirself deeply, and quite unexpectedly, drawn to the magnificent pair at first sight. So much so that sHe had withdrawn reflexively in surprise. Not only were they both a delight to hir eyes, but sHe could sense an intelligence very different from anything sHe had previously encountered on this world. Yet for all hir rising sense of excitement, sHe was more than aware that such a critical change of plan would need to be very carefully considered.

The Midwayers, who had lived on after the death of their parents especially those who had taken to posturing as local deities, always seemed to Noe to possess a very limitnsued intelligence. SHe found the demands and limitations they imposed on their vulnerable worshippers became progressively more irrational as time had passed, and worse, that the density of planetary life had thickened the Midwayers' emotional needs and responses. It was just this emotional deterioration in the consciousness of these once-brilliant beings that was directly responsible for so much of the insueing chaos.

Exosociologists who have studied the consequences of celestial rebellions on the worlds effected by such profound upheavals have pointed out that isolating the offending planets, while a sensible policy from the local authority's point of view, because the systemwide quarantine prevented further spread of the dissent, must also necessarily result in severely traumatizing the remaining Midway creatures. With the subsequent death of their parents, they would be bound to feel doubly abandoned and desperate. The sociologists added that this confusion would be compounded if the Prince, as was the case on this planet, succumbed to the temptation of assuming absolute power. In setting himself up as the supreme god of this world, the Prince would have tacitly encouraged the Staff's rebellious offspring to use the mantle of divinity as one of the only effective means left to them in their need to control human beings.

Noe had watched this unappealing behavior repeat itself wherever these gods and goddesses had gathered. Although in some cases feeble attempts had been made to uplift the natives by playing on their superstitious natures, little had been done to encourage the evolution of a truly independent intelligence. These self-proclaimed deities, while they were emotionally degenerating under the weight of hubris and their own internecine struggles for dominance, had become, over time, all the more dictatorial and demanding of their half-hypnotized flocks, manipulating them through fear and guilt for their own devious and jealous ends.