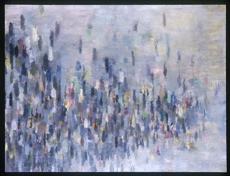 For lessons on the topic of Sociology, follow this link.

Sociology is the study of society and human social action. It generally concerns itself with the social rules and processes that bind and separate people not only as individuals, but as members of associations, groups, communities and institutions, and includes the examination of the organization and development of human social life. The sociological field of interest ranges from the analysis of short contacts between anonymous individuals on the street to the study of global social processes. Most sociologists work in one or more subfields.

The meaning of the word comes from the suffix "-ology" which means "study of," derived from Greek, and the stem "soci-" which is from the Latin word socius, meaning member, friend, or ally, thus referring to people in general. It is a social science involving the application of social theory and research methods to the study of the social lives of people, groups, and societies, sometimes defined as the study of social interactions. It is a relatively new academic discipline which evolved in the early 19th century.

Because sociology is such a broad discipline, it can be difficult to define, even for professional sociologists. One useful way to describe the discipline is as a cluster of sub-fields that examine different dimensions of society. For example, social stratification studies inequality and class structure; demography studies changes in a population size or type; criminology examines criminal behavior and deviance; political sociology studies government and laws; and the sociology of race and sociology of gender examine society's racial and gender cleavages.

Sociological methods, theories, and concepts may inspire sociologists to explore the origins of commonly accepted conventions. Sociology offers insights about the social world that extend beyond explanations that rely on individual quirks and personalities. Sociologist may find general social patterns in studying the behaviour of particular individuals and groups. This specific approach to social reality is sometimes called the sociological perspective.

Sociologists use a diversity of research methods, including case studies, historical research, interviewing, participant observation, social network analysis, survey research, statistical analysis, and model building, among other approaches. Since the late 1970s, many sociologists have tried to make the discipline useful for non-academic purposes. The results of sociological research aid educators, lawmakers, administrators, developers, and others interested in resolving social problems and formulating public policy, through subdisciplinary areas such as evaluation research, methodological assessment, and public sociology.

New sociological sub-fields continue to appear - such as community studies, computational sociology, network analysis, actor-network theory and a growing list, many of which are cross-disciplinary in nature.