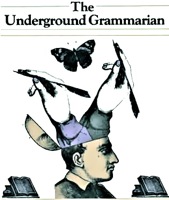 A word is a unit of language that represents a concept which can be expressively communicated with meaning. A word consists of one or more morphemes which are linked more or less tightly together, and has a phonetic value.

Typically a word will consist of a root or stem and zero or more affixes. Words can be combined to create other units of language such as phrases, clauses, and sentences. A word consisting of two or more stems joined together form a compound. A word combined with an already existing word or part of a word form a portmanteau.

For lessons on the topic of Words, follow this link.

Depending on the language, words can be difficult to identify or decipher. Dictionaries take upon themselves the task of categorizing a language's lexicon into lemmas. These can be taken as an indication of what constitutes a "word" in the opinion of the authors.

In spoken language, the distinction of individual words is usually given by rhythm or accent, but short words are often run together. See clitic for phonologically dependent words. Spoken French has some of the features of a polysynthetic language: il y est allé ("He went there") is pronounced /i.ljɛ.ta.le/. Since the majority of the world's languages are not written, the scientific determination of word boundaries becomes important.

There are five ways to determine where the word boundaries of spoken language should be placed:

Potential pause
A speaker is told to repeat a given sentence slowly, allowing for pauses. The speaker will tend to insert pauses at the word boundaries. However, this method is not foolproof: the speaker could easily break up polysyllabic words.
Indivisibility
A speaker is told to say a sentence out loud, and then is told to say the sentence again with extra words added to it. Thus, I have lived in this village for ten years might become I and my family have lived in this little village for about ten or so years. These extra words will tend to be added in the word boundaries of the original sentence. However, some languages have infixes, which are put inside a word. Similarly, some have separable affixes; in the German sentence "Ich komme gut zu Hause an," the verb ankommen is separated.
Minimal free forms
This concept was proposed by Leonard Bloomfield in 1926. Words are thought of as the smallest meaningful unit of speech that can stand by themselves. This correlates phonemes (units of sound) to lexemes (units of meaning). However, some written words are not minimal free forms, as they make no sense by themselves (for example, the and of).
Phonetic boundaries
Some languages have particular rules of pronunciation that make it easy to spot where a word boundary should be. For example, in a language that regularly stresses the last syllable of a word, a word boundary is likely to fall after each stressed syllable. Another example can be seen in a language that has vowel harmony (like Turkish]]): the vowels within a given word share the same quality, so a word boundary is likely to occur whenever the vowel quality changes. Nevertheless, not all languages have such convenient phonetic rules, and even those that do present the occasional exceptions.
Semantic units
Much like the above mentioned minimal free forms, this method breaks down a sentence into its smallest semantic units. However, language often contains words that have little semantic value (and often play a more grammatical role), or semantic units that are compound words.

As Plag suggests, the idea of a lexical item being considered a word should also adjust to pragmatic criteria. The word "hello", for example, does not exist outside of the realm of greetings being difficult to assign a meaning out of it. This is a little more complex if we consider "how do you do?": is it a word, a phrase, or an idiom? In practice, linguists apply a mixture of all these methods to determine the word boundaries of any given sentence. Even with the careful application of these methods, the exact definition of a word is often still very elusive.

There are some words that seem very general, but may truly have a technical definition, such as the word "soon," usually meaning within a week.

In languages with a literary tradition, there is interrelation between orthography and the question of what is considered a single word. Word separators (typically space marks) are common in modern orthography of languages using alphabetic scripts, but these are (excepting isolated precedents) a modern development.

In English orthography, words may contain spaces if they are compounds or proper nouns such as ice cream or air raid shelter.

Vietnamese orthography, although using the Latin alphabet, delimits monosyllabic morphemes, not words. Conversely, synthetic languages often combine many lexical morphemes into single words, making it difficult to boil them down to the traditional sense of words found more easily in analytic languages; this is especially difficult for polysynthetic languages such as Inuktitut and Ubykh, where entire sentences may consist of single such words.

Logographic scripts use single signs (characters) to express a word. Most de facto existing scripts are however partly logographic, and combine logographic with phonetic signs. The most widespread logographic script in modern use is the Chinese script. While the Chinese script has some true logographs, the largest class of characters used in modern Chinese (some 90%) are so-called pictophonetic compounds (形声字, Xíngshēngz). Characters of this sort are composed of two parts: a pictograph, which suggests the general meaning of the character, and a phonetic part, which is derived from a character pronounced in the same way as the word the new character represents. In this sense, the character for most Chinese words consists of a determiner and a syllabogram, similar to the approach used by cuneiform script and Egyptian hieroglyphs.

There is a tendency informed by orthography to identify a single Chinese character as corresponding to a single word in the Chinese language, parallel to the tendency to identify the letters between two space marks as a single word in the English language. In both cases, this leads to the identification of compound members as individual words, while e.g. in German orthography, compound members are not separated by space marks and the tendency is thus to identify the entire compound as a single word. Compare e.g. English capital city with German Hauptstadt and Chinese 首都 (lit. 首|chief, 都|metropolis): all three are equivalent compounds, in the English case consisting of "two words" separated by a space mark, in the German case written as a "single word" without space mark, and in the Chinese case consisting of two logographic characters.

Grammar classifies a language's lexicon into several groups of words. The basic bipartite division possible for virtually every natural language is that of nouns vs. verbs.

The classification into such classes is in the tradition of Dionysius Thrax, who distinguished eight categories: noun, verb, adjective, pronoun, preposition, adverb, conjunction and interjection.

In Indian grammatical tradition, Panini introduced a similar fundamental classification into a nominal (nāma, suP) and a verbal (ākhyāta, tiN) class, based on the set of desinences taken by the word.

Primitive man made little effort to put his religious convictions into words. His religion was danced out rather than thought out. Modern men have thought out many creeds and created many tests of religious faith. Future religionists must live out their religion, dedicate themselves to the wholehearted service of the brotherhood of man. It is high time that man had a religious experience so personal and so sublime that it could be realized and expressed only by "feelings that lie too deep for words."