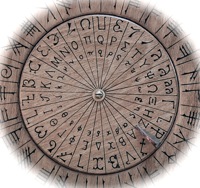 1 a : a set of letters or other characters with which one or more languages are written especially if arranged in a customary order

b : a system of signs or signals that serve as equivalents for letters

An alphabet is a standardized set of letters — basic written symbols or graphemes — each of which roughly represents a phoneme in a spoken language, either as it exists now or as it was in the past. There are other systems, such as logographies, in which each character represents a word, morpheme, or semantic unit, and syllabaries, in which each character represents a syllable. Alphabets are classified according to how they indicate vowels:

The word "alphabet" came into Middle English from the Late Latin word Alphabetum, which in turn originated in the Ancient Greek Αλφάβητος Alphabetos, from alpha and beta, the first two letters of the Greek alphabet. Alpha and beta in turn came from the first two letters of the Phoenician alphabet, and meant ox and house respectively. There are dozens of alphabets in use today, the most common being Latin, deriving from the first true alphabet, Greek. Most of them are composed of lines (linear writing); notable exceptions are Braille, fingerspelling (Sign language), and Morse code.[1]

And all this explains how the Sumerians appeared so suddenly and mysteriously on the stage of action in Mesopotamia. Investigators will never be able to trace out and follow these tribes back to the beginning of the Sumerians, who had their origin two hundred thousand years ago after the submergence of Dalamatia. Without a trace of origin elsewhere in the world, these ancient tribes suddenly loom upon the horizon of civilization with a full-grown and superior culture, embracing temples, metalwork, agriculture, animals, pottery, weaving, commercial law, civil codes, religious ceremonial, and an old system of writing. At the beginning of the historical era they had long since lost the alphabet of Dalamatia, having adopted the peculiar writing system originating in Dilmun. The Sumerian language, though virtually lost to the world, was not Semitic; it had much in common with the so-called Aryan tongues.[2]