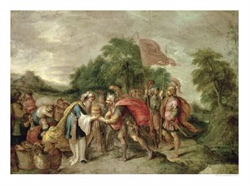 Abrahamic philosophy, in its loosest sense, comprises the series of philosophical schools that emerged from the study and commentary of the common ancient Semitic tradition which can be traced by their adherents to Abraham ("Father/Leader of many" Hebrew אַבְרָהָם ("Avraham") Arabic ابراهيم ("Ibrahim"), a patriarch whose life is narrated in the Hebrew Bible/Old Testament, and as a prophet in the Qur'an and also called a prophet in Genesis 20:7).

The standard text common to all of these subsequent traditions are what is known as the Hebrew Bible, roughly the first five books of the Old Testament, starting with the book of Genesis through to Deuteronomy. However, each of them added substantially different texts to their emerging canons, and hence their respective philosophical developments varied widely.