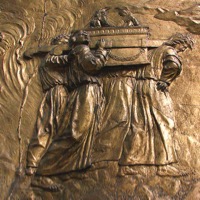 b : something that affords protection and safety

b : a repository traditionally in or against the wall of a synagogue for the scrolls of the Torah

The Ark of the Covenant

The Ark of the Covenant (Hebrew: אָרוֹן הַבְּרִית‎ ʾĀrôn Habbərît, modern pron. Aron haBrit), also known as the Ark of the Testimony, is a chest described in the Book of Exodus as containing the Tablets of Stone on which the Ten Commandments were inscribed. According to the New Testament Letter to the Hebrews, the Ark also contained Aaron's rod, a jar of manna, and the first Torah scroll as written by Moses; however, the first of the Books of Kings says that at the time of King Solomon, the Ark contained only the two Tablets of the Law. According to the Book of Exodus, the Ark was built at the command of God, in accordance with the instructions given to Moses on Mount Sinai In Deuteronomy 5:6, these events are described as having transpired at Mount Horeb. God was said to have communicated with Moses "from between the two cherubim" on the Ark's cover.

The biblical account relates that, approximately one year after the Israelites' exodus from Egypt, the Ark was created according to the pattern given to Moses by God when Israel was encamped at the foot of Mount Sinai. Thereafter, the gold-plated acacia chest was carried by the Levites approximately 2,000 cubits (approximately 800 meters or 2,600 feet) in advance of the people when on the march or before the Israelite army, the host of fighting men.[8] When the Ark was borne by Levites into the bed of the Jordan River, the waters parted as God had parted the waters of the Red Sea, opening a pathway for the entire host to pass through.[9][10] The walls of the city of Jericho were shaken to the ground with no more than a shout from the army after the Ark of the Covenant was paraded round them for seven days by Levites accompanied by seven priests sounding seven trumpets of rams' horns.] When carried, the Ark was always hidden under a large veil made of skins and blue cloth, always carefully concealed, even from the eyes of the priests and the Levites who carried it. According to National Geographic in 2007, there are no contemporary extra-biblical references to the Ark.

Noah's Ark (Hebrew: תיבת נח‎; Biblical Hebrew: Tevat Noaḥ) is the vessel in the Genesis flood narrative (Genesis chapters 6–9) by which God saves Noah, his family, and a remnant of all the world's animals from the flood. According to Genesis, God gave Noah instructions for building the ark. Seven days before the deluge, God told Noah to enter the ark with his household and the animals. The story goes on to describe the ark being afloat throughout the flood and subsequent receding of the waters before it came to rest on the Mountains of Ararat. The story is repeated, with variations, in the Quran, where the ark appears as Safina Nuh (Arabic: سفينة نوح‎ "Noah's boat"). The Genesis flood narrative is similar to numerous other flood myths from a variety of cultures. The earliest known written flood myth is the Sumerian flood myth found in the Epic of Ziusudra. There is no scientific evidence supporting a global flood. Searches for Noah's Ark have been made from at least the time of Eusebius (c.275–339 AD) to the present day. Despite many expeditions, no scientific evidence of the ark has been found.