From Nordan Symposia
(Redirected from Arts)
Jump to navigationJump to search 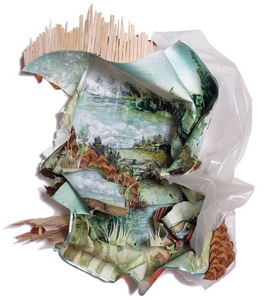 Art is a broad subdivision of culture, composed of many expressive disciplines. In modern usage, it is a term broader than "art", which usually means the visual arts (comprising both fine art, decorative art, and crafts). The arts encompasses visual arts, performing arts, language arts, and culinary arts. Many artistic disciplines involve aspects of the various arts, so the definitions of these terms overlap to some degree.

The great traditions in art have a foundation in the art of one of six ancient civilizations:

In Byzantine and Gothic art of the Middle Ages, the dominance of the church insisted on the expression of biblical and not material truths.

Eastern art has generally worked in a style akin to Western medieval art, namely a concentration on surface patterning and local colour (meaning the plain colour of an object, such as basic red for a red robe, rather than the modulations of that colour brought about by light, shade and reflection). A characteristic of this style is that the local colour is often defined by an outline (a contemporary equivalent is the cartoon). This is evident in, for example, the art of India, Tibet and Japan.

The physical and rational certainties depicted by the 19th-century Enlightenment were shattered not only by new discoveries of relativity by Einstein [1] and of unseen psychology by Freud, [2] but also by unprecedented technological development.

Increasing global interaction during this time saw an equivalent influence of other cultures into Western art.

A precise definition of the arts can be contentious, but the following areas of activity usually are included:

Historically, the arts included the Artes Liberales (liberal arts) taught in medieval universities as part of the Trivium (grammar, rhetoric, and logic) and the Quadrivium, (arithmetic, geometry, music, and astronomy.)

In modern academia, the arts are usually grouped with or a subset of the Humanities. Some subjects in the Humanities are history, linguistics, literature, philosophy, women's studies.

Newspapers such as the New York Times and The Times of London typically include a section on the arts.[2]

The high mission of any art is, by its illusions, to foreshadow a higher universe reality, to crystallize the emotions of time into the thought of eternity. (48:7.23)
Retrieved from "http://nordan.daynal.org/w/index.php?title=Art&oldid=129641"
Categories: