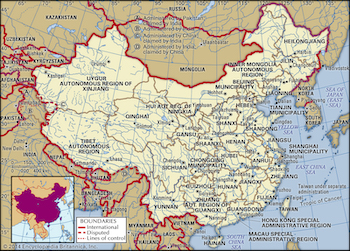 late 16th century (as an adjective): from Persian chīnī ‘relating to China’, where it was originally made.

A country in eastern Asia, the fourth largest and most populous in the world; population 1,376,000,000 (estimated 2015); capital, Beijing; language, Chinese (Mandarin is the official form). Official name People's Republic of China.

Chinese civilization stretches back until at least the 3rd millennium bc, the country being ruled by a series of dynasties until the Qing (or Manchu) dynasty was overthrown by Sun Yat-sen in 1911; China was proclaimed a republic the following year. After World War II, the Kuomintang government of Chiang Kai-shek was overthrown by the Communists under Mao Zedong, and the People's Republic of China was declared in 1949. Market-oriented reforms were introduced in the last quarter of the twentieth century.