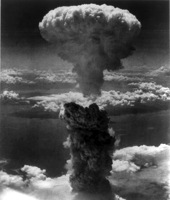 A modern thermonuclear weapon weighing little more than 2,400 pounds (1,100 kg) can produce an explosive force comparable to the detonation of more than 1.2 million tons (1.1 million metric tons) of TNT. Thus, even a small nuclear device no larger than traditional bombs can devastate an entire city by blast, fire and radiation. Nuclear weapons are considered weapons of mass destruction, and their use and control has been a major focus of international relations policy since their debut.

Only two nuclear weapons have been used in the course of warfare, both by the United States near the end of World War II. On 6 August 1945, a uranium gun-type device code-named "Little Boy" was detonated over the Japanese city of Hiroshima. Three days later, on 9 August, a plutonium implosion-type device code-named "Fat Man" was exploded over Nagasaki, Japan. These two bombings resulted in the deaths of approximately 200,000 Japanese people—mostly civilians—from acute injuries sustained from the explosions. The role of the bombings in Japan's surrender, and their ethical status, remain the subject of scholarly and popular debate.

For lessons on the topic of the Atom Bomb (Nuclear Weapons), follow this link.

Since the bombings of Hiroshima and Nagasaki, nuclear weapons have been detonated on over two thousand occasions for testing purposes and demonstrations. Only a few nations possess such weapons or are suspected of seeking them. The only countries known to have detonated nuclear weapons—and that acknowledge possessing such weapons—are (chronologically by date of first test) the United States, the Soviet Union (succeeded as a nuclear power by Russia), the United Kingdom, France, the People's Republic of China, India, Pakistan, and North Korea. In addition, Israel is also widely believed to possess nuclear weapons, though it does not acknowledge having them. One state, South Africa, has admitted to having previous fabricated nuclear weapons in the past, but has since disassembled their arsenal and submitted to international safeguards.[1]