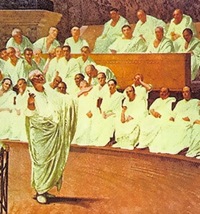 Auctoritas is a Latin word and is the origin of English "authority". While historically its use in English was restricted to discussions of the political history of Rome, the beginning of phenomenological philosophy in the twentieth century changed the use of the word substantially.

In Ancient Rome, Auctoritas referred to the general level of prestige a person had in Roman society. And, as a consequence, their clout, influence, and ability to rally support around one's will.

According to French linguist Emile Benveniste, auctor (which also gives us English "author") is derived from Latin augeō ("to augment"). The auctor is "is qui auget", the one who augments the act or the juridical situation of another. [1]

Auctor in the sense of "author", comes from auctor as founder or, one might say, "planter-cultivator". Similarly, auctoritas refers to rightful ownership, based on one's having "produced" or homesteaded the article of property in question - more in the sense of "sponsored" or "acquired" than "manufactured". (See Hannah Arendt On Auctoritas below.) This auctoritas would, for example, persist through an usucapio of ill-gotten or abandoned property.

In the private domain, those under tutelage (guardianship), such as women and minors, were similarly obliged to seek the sanction of their tutors ("protectors") for certain actions. Thus, auctoritas characterizes the auctor: The pater familias authorizes - that is, validates and legitimates - his son's wedding in prostate. In this way, auctoritas might function as a kind of "passive counsel", much as, for example, a scholarly authority.

Politically, auctoritas was connected to the Roman Senate's authority (auctoritas patrum), as opposed to potestas or imperium (power) , which were held by the magistrates or the people. In this context, Auctoritas could be defined as the juridical power to authorize some other act.

A popular translation is 'the ability to make people do what you want, just by being who you are.'

After the fall of the Roman Republic, during the days of the Roman Empire, the Emperor had the title of princeps ("first citizen" of Rome) and held the auctorictas principis - the supreme moral authority -, in conjunction with the imperium and potestas - the military, judiciary and administrative powers.

Hannah Arendt considers auctoritas a reference to founding acts as the source of political authority in Ancient Rome. She takes foundation to include (as augeō suggests), the continuous conservation and increase of principles handed down from "the beginning" (see also pietas). According to Arendt, this source of authority was rediscovered in the course of the 18th-century American Revolution (see "United States of America" under Founding Fathers), as an alternative to an intervening Western tradition of absolutism, claiming absolute authority, as from God (see Divine Right of Kings), and later from Nature, Reason, History, and even, as in the French Revolution, Revolution itself (see La Terreur). Arendt views a crisis of authority as common to both the American and French Revolutions, and the response to that crisis a key factor in the relative success of the former and failure of the latter.

Arendt further considers the sense of auctor and auctoritas in various Latin idioms, and the fact that auctor was used in contradistinction to - and (at least by Pliny) held in higher esteem than - artifices, the artisans to whom it might fall to "merely" build up or implement the author-founder's vision and design.

Philosopher Giorgio Agamben suggests a relationship between the Roman auctoritas, Max Weber's "charismatic power", and Carl Schmitt's theoretical/ideological basis for the Nazi Führertum doctrine. Agamben compares auctoritas to the Führer (who embodies nomos empsuchon or "living law") in their relationship to the observance of gramma (written law).