From Nordan Symposia
(Redirected from Authorship)
Jump to navigationJump to search 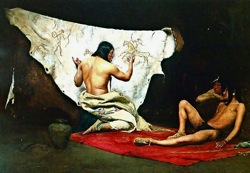 An author is any person(s) or entity(s) that originates and assumes responsibility for an expression or communication. Authors are responsible for acknowledging contributors and are distinguished from a compiler, translator, editor, or copyist.

Frequently the word author is used to suggest a person who creates a written work, such as a book, story, article, or the like, whether short or long, fiction or nonfiction, poetry or prose, technical or literary. Within copyright law the term "author" is often used for the creator of any work, be it written, painted, sculpted, music, a photograph or a film. For purposes of copyright, an author may be a corporation as well an individual. One key issue in literary theory is the relationship between the meaning of some literary text and institutional system of the discourse, that it is not the same for all discourses, that it is not spontaneous attribution, and that it might not refer to a real individual.

In literary theory, the author function is the writer of a work as seen by the reader. Each work by the same author has a separate author function, and each work by numerous or unknown authors has a single distinct author function. In the wake of postmodern literature, Roland Barthes in his seminal essay Death of the Author (1968) and other literary critics have questioned this function, i.e. the relevance of the authorship to a text's meaning.

For lessons on the topic of Author(ship), follow this link.

Some historical financial arrangements between authors and publishers

Authorship of articles, books and other original works is a primary basis on which many academics are evaluated for employment, promotion, and tenure. In academic publishing, authorship of a work is claimed by those making intellectual contributions to the completion of the research described in the work. In simple cases, a solitary scholar carries out a research project and writes the subsequent article or book. In many disciplines, however, collaboration is very common in some and issues of authorship are sometimes complex and controversial. In these contexts, authorship can encompass activities other than writing the article; a researcher who comes up with an experimental design and analyzes the data may be considered an author, even if he had little role in composing the text describing the results.

Guidelines for assigning authorship vary between institutions and disciplines. They may be formally defined or simply customary. Incorrect application of authorship rules occasionally leads to charges of academic misconduct and sanctions for the violator. In one study, disputed authorship was the most commonly reported form of alleged misconduct. (Nylenna, M.,Andersen, D., Dahiquist, G., Sarvas, M., and Aakvaag, A. (1999) Handling of scientific dishonesty in the Nordic countries. The Lancet 354: 11-18 [2] Acessed 2006-09-02.)

Some major institutions have put forth guidelines for authorship. The International Committee of Medical Journal Editors specifies that authors must have made a substantial intellectual contribution to a study's conception and design, or to the acquisition, analysis or interpretation of data. They must also have drafted or revised the article's intellectual content, and approved the final version. The journal Proceedings of the National Academy of Sciences has an editorial policy that specifies "authorship should be limited to those who have contributed substantially to the work" and furthermore, "authors are strongly encouraged to indicate their specific contributions" as a footnote.

Some papers will have quite a few authors. In genome sequencing and particle-physics collaborations, for example, a paper's author list can run into the hundreds. One commentator wrote, "In more than 25 years working as a scientific editor ... I have not been aware of any valid argument for more than three authors per paper, although I recognize that this may not be true for every field."(van Loon, A. J. Pseudo-authorship. Nature 389, 11 (04 September 1997); doi:10.1038/37855)

Authors are sometimes included in a list without their permission. Anonymous (presumably the editor of Nature Materials at that time). Authorship without authorization. Nature Materials 3, 743 (2004) doi:10.1038/nmat1264

Honorary authorship is sometimes granted to those who played no significant role in the work, for a variety of reasons. Until recently, it was standard for the head of a German department or institution to listed as an author on a paper regardless of input.<ref>Pearson, H. Credit where credit's due. Nature 440, 591-592 (30 March 2006) doi:10.1038/440591a

A phenomena termed ghost authorship is sometimes discussed in relation to industry initiated research. When an individual makes a substantial contribution to the research and is not listed as an author, he is considered a ghost author. Ghost authorship is considered problematic especially because it may be used to obscure the participation of researchers with conflicts of interest.(Nylenna Gøtzsche, P.C., Hróbjartsson, A., Johansen, H.K., Haahr, M.T., Altman, D.G., Chan, A.-W. (2007) Ghost authorship in industry-initiated randomised trials. PLoS Medicine 4(1), 47-52.)

Claiming authorship twice for the same work (e.i. submission of findings to more than one journal) is usually regarded as misconduct, under what is known as the Ingelfinger rule, named after the editor of the New England Journal of Medicine 1967-1977, Franz Ingelfinger [3].

Responsibility of authors and of coauthors

All co-authors should be able to understand and support the major points of the paper. An author's reputation can be damaged when he allows his name to be used on work he was not intimately involved with. In a prominent case, an American stem cell researcher had his name listed on paper that was later revealed to be fraudulent. Although the researcher is not accused of participating in the fraud, a panel at his university found that "his failure to more closely oversee research with his name on it does make him guilty of 'research misbehavior.'"(Holden, Constance. Schatten: Pitt Panel Finds ‘Misbehavior’ but Not Misconduct. Science. 17 February 2006, vol 311: 928.)

All authors, including coauthors, are expected to have made reasonable attempts to check findings submitted to academic journals for publication. In some cases coauthors of faked research have been accused of inappropriate behavior or research misconduct for failing to verify reports authored by others or by a commercial sponsor. Examples include the case of Gerald Schatten who co-authored with Hwang Woo-Suk, the case of Professor Geoffrey Chamberlain who co-authored papers with Malcolm Pearce (see lessons from the Pearce affair), and the coauthors with Jan Hendrik Schön at Bell Laboratories. More recent cases include Charles Nemeroff, then the editor-in-chief of Neuropsychopharmacology, and the so-called Sheffield Actonel affair.

In addition, authors are expected to keep all study data for later examination even after publication. Both scientific and academic censure can result from a failure to keep primary data; the case of Dr. Ranjit Chandra of Memorial University of Newfoundland provides a good example of this (O'Neil-Yates, Chris: The Secret Life of Dr. Chandra. The National (CBC Newscast). 30 January 2006, [5]). Many scientific journals also require that authors provide information to allow readers to determine whether the authors may have commercial or non-commercial conflicts of interest. Outlined in the author disclosure statement for the American Journal of Human Biology[6], this is a policy more common in scientific fields where funding often comes from corporate sources. Authors are also commonly required to provide information about ethical aspects of research, particularly where research involves human or animal participants or use of biological material. Provision of incorrect information to journals may be regarded as misconduct. Financial pressures on universities have encouraged this type of misconduct. The majority of recent cases of alleged misconduct involving undisclosed conflicts of interest or failure of the authors to have seen scientific data involve collaborative research between scientists and biotechnology companies (Nemeroff, Blumsohn. [7]