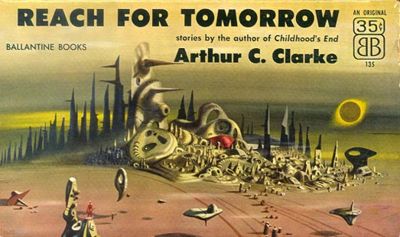 The Ballantine Publishing Group, better known as Ballantine Books, is a major American book publisher founded in 1952 by Ian Ballantine. It was acquired by Random House in 1973 and remains part of that company today. Ballantine's logo is a pair of mirrored letter "B"'s back to back (similar to the center of the ABBA logo).

Following Fawcett Publications' controversial 1950 introduction of Gold Medal paperback originals rather than reprints, Lion Books, Avon and Ace also began to do reprints. Then, in 1952, Ian Ballantine announced that he would "offer trade publishers a plan for simultaneous publishing of original titles in two editions, a hardcover 'regular' edition for bookstore sale, and a paper-cover, 'newsstand' size, low-priced edition for mass market sale."

The first Ballantine Book was Cameron Hawley's Executive Suite, published in 1952. The publishing industry sat up and took notice, because the simultaneous hardcover and paperback editions were obvious successes. Houghton Mifflin published the $3.00 hardcover at the same time Ballantine distributed its 35¢ paperback. By February 1953 Ballantine had sold 375,000 copies and was preparing to print 100,000 more. Houghton Mifflin sold 20,500 hardback copies. Instead of hurting hardback sales, the paperback edition gave the book more publicity. Movie rights were sold to MGM, and Robert Wise directed the 1954 film, nominated for four Academy Awards.

With this kind of sales and publicity, the early Ballantine titles were catapulted into spinner racks across the country. Executive Suite was followed by Hal Ellson's The Golden Spike (#2), Stanley Baron's All My Enemies (#3), Luke Short's Saddle by Starlight (#4, also with Houghton Mifflin), Ruth Park's The Witch's Thorn (#5, also with Houghton Mifflin), Emile Danoen's Tides of Tide (#6), Frank Bonham's Blood on the Land (#7), Al Capp's The World of Li'l Abner (#8, with Farrar, Straus & Young) and LaSelle Gilman's The Red Gate (#9). Non-fiction was introduced with John Bartlow Martin's criminal case history, Why Did They Kill? (#14).

During the early 1950s, Ballantine attracted attention as one of the leading publishers of paperback science fiction and fantasy, beginning with The Space Merchants (#21). The Frederik Pohl and C.M. Kornbluth novel had first appeared in Galaxy Science Fiction under the title Gravy Planet. Ballantine's science fiction line included the unusual Star Science Fiction Stories. With cover paintings by Richard Powers, this innovative anthology series offered new fiction rather than reprints. Edited by Frederik Pohl, it successfully combined the formats of both magazines and paperbacks.

In the early 1960s the company engaged in a well-known rivalry with Ace Books for the rights to reprint the works of J. R. R. Tolkien and Edgar Rice Burroughs in paperback form. Ballantine prevailed in the struggle for the Tolkien work, with their editions of Tolkien's The Lord of the Rings including a message on the back cover from Tolkien himself urging consumers to buy Ballantine's version and boycott "unauthorized editions" (i.e. the version from Ace Books). A separate Canadian edition of the books was also published, with different front cover art work, though Tolkien still asked for (and received) permission to add a message to the back cover of the Canadian editions expressing his support for them.

In 1969 Ballantine launched the Ballantine Adult Fantasy series under the editorship of Lin Carter, which brought a number of rare titles back into print, as well as launching Katherine Kurtz's Deryni series. During the mid-1970s, Ballantine published a 10-volume series of adaptations written by Alan Dean Foster based upon teleplays from the animated Star Trek, entiled the Star Trek Logs. In 1968, Ballantine also published the first non-fiction book related to Star Trek, The Making of Star Trek by Stephen E. Whitfield and Gene Roddenberry.

In 1977 Ballantine set up Del Rey Books as a science fiction and fantasy imprint under the editorship of Lester del Rey and his wife Judy-Lynn. This may have been a response to rival Donald A. Wollheim's launch of specialist science fiction publisher DAW Books. Del Rey/Lucas Books has published novelizations of all six Star Wars films, as well as numerous "bridge" novels, prequels and sequels to the films.

Ballantine's 3000-title backlist includes titles from several imprints. Fawcett, now home to Ballantine's mysteries, was acquired in 1982. In 1987, Ivy was launched and now features Ballantine's romance novels. One World was founded in 1991 as a publisher of multicultural books, and Wellspring has published spiritual guidance and inspiration since 1999. Ian and Betty Ballantine also founded Rufus Publications.

J. Grant Thiessen in Science-Fiction Collector #6 offered a detailed listing of all Ballantine science fiction, fantasy and horror titles from 1953 to 1976, including later printings.