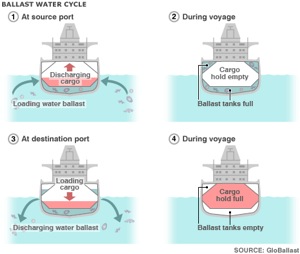 A ballast tank is a compartment within a boat, ship or other floating structure that holds water.

The basic concept behind the ballast tank can be seen in many forms of aquatic life, such as the blowfish or argonaut octopus, and the concept has been invented and reinvented many times by humans to serve a variety of purposes. For example, in 1849 Abraham Lincoln, then an Illinois attorney, patented a ballast-tank system to enable cargo vessels to pass over shoals in North American rivers.

A vessel may have a single ballast tank near its center or multiple ballast tanks typically on either side. A large vessel typically will have several ballast tanks including double bottom tanks, wing tanks as well as forepeak and aftpeak tanks. Adding ballast to a vessel lowers its center of gravity, and increases the draft of the vessel. Increased draft may be required for proper propeller immersion.

A ballast tank can be filled or emptied in order to adjust the amount of ballast force. Ships designed for carrying large amounts of cargo must take on ballast water for proper stability when traveling with light loads and discharge water when heavily laden with cargo. Small sailboats designed to be light weight for being pulled behind automobiles on trailers are often designed with ballast tanks that can be emptied when the boat is removed from the water.

Ballast water taken in to a tank from one body of water and discharged in another body of water can introduce invasive species of aquatic life. The taking in of water from ballast tanks has been responsible for the introduction of species that cause environmental and economic damage. For example, zebra mussels in the Great Lakes of Canada and the United States.