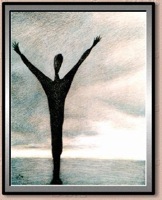 Middle English benediccioun, from Late Latin benediction-, benedictio, from benedicere to bless, from Latin, to speak well of, from bene well (akin to Latin bonus good) + dicere to say

A benediction (Latin: bene, well + dicere, to speak) is a short invocation for divine help, blessing and guidance, usually at the end of worship service.

Judaism developed ritualised benedictions (Berachot) for use at the Temple of Jerusalem, and the home. These Berachot often took the form of a blessing upon the fulfillment of a mitzvah (divine commandment). The most important benediction was the Priestly Blessing pronounced by the kohenim (priests descended from Aaron), as found in Numbers 6:23-27.

From the earliest church, Christians adopted ceremonial benedictions into their liturgical worship, particularly at the end of a service. Such benedictions have been regularly practiced both in the Christian East and West. At the time of the Reformation, Protestants abandoned many of the benedictions of the Roman Catholic Church, including the Apostolic Benediction made by the Pope and his delegates, the "last blessing" of the dying, and virtually all benedictions of inanimate objects. However, the Anglican church retained the principle of benediction, and a benediction or blessing ends most Anglican services.

A common form of benediction in Roman Catholic and liturgical Protestant churches is for the worship leader to raise his hands and recite the words of the biblical Priestly Blessing (Numbers 6:23-27). This addition to the mass was made by Martin Luther in his Deutsche Messe and remains traditional in Lutheran Churches.[1]

Some Protestant churches have recently started to reincorporate the use of benedictions in the closing of their church services. Such benedictions may be taken from Scripture, written by a church member, or a combination of the two.

An often complex and lengthy blessing before communion took place in the mass of the Gallican Rite and in some French sees survived until the Gallican rites controversy when they were suppressed. Pope John Paul II, however, gave permission for these sees to restore this traditional element of their local rite.

In the Orthodox Church, benedictions will occur at both the beginning and the end of each service, and there may be other benedictions during the course of the service. The final benediction (the dismissal) is the most important, and will often entail mention of the feast or saint being commemorated that day. The priest will bless with his right hand, and the bishop will bless with both hands. In both cases, the hand is held so that the fingers form the initials IC XC (the abbreviation for "Jesus Christ" in Greek), and he traces the Sign of the Cross in the air with his hand. If a bishop or abbot is holding his crozier while making the benediction, he will raise his right hand and trace the Sign of the Cross with both his crozier and right hand, crossing the one in front of the other. More solemn benedictions, such as that which comes at the end of the Divine Liturgy, will be made with a blessing cross rather than the hand.[[1]