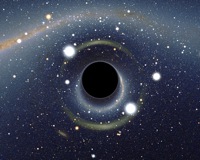 According to the general theory of relativity, a black hole is a region of space from which nothing, including light, can escape. It is the result of the deformation of spacetime caused by a very compact mass. Around a black hole there is an undetectable surface which marks the point of no return, called an event horizon. It is called "black" because it absorbs all the light that hits it, reflecting nothing, just like a perfect black body in thermodynamics. Under the theory of quantum mechanics black holes possess a temperature and emit Hawking radiation.

Despite its invisible interior, a black hole can be observed through its interaction with other matter. A black hole can be inferred by tracking the movement of a group of stars that orbit a region in space. Alternatively, when gas falls into a stellar black hole from a companion star, the gas spirals inward, heating to very high temperatures and emitting large amounts of radiation that can be detected from earthbound and Earth-orbiting telescopes.