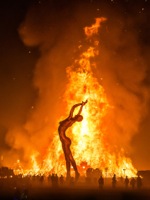 A bonfire is a controlled outdoor fire used for informal disposal of burnable waste material or as part of a celebration. Celebratory bonfires are typically designed to burn quickly and may be very large. The name "bonfire" is from "bone-fire".

In the ancient druid religions, bonfires were held between 31 October and 5 November to celebrate Samhain, a harvest festival where they used bonfires to burn the bones of the slaughtered livestock they had stored for the winter months. People and their livestock would often walk between two bonfires as a cleansing ritual, and the bones of slaughtered livestock were cast into its flames. Some modern day Druids and Pagans see bonfire night as a significant celebration to end the harvest festival.

In Israel, on the eve of Lag BaOmer, bonfires are lit on to commemorate the Mishnaic sage Rabbi Shimon Bar Yochai who according to tradition died on Lag BaOmer. Rabbi Shimon Bar Yochai is accredited with having composed the Kabalistic work The Zohar (literally "The Shining" - hence the custom of lighting fire to commemorate him). The main celebration takes place at Rabbi Shimon's tomb on Mt. Meron in northern Israel, but all over the country bonfires are lit in open spaces. Linked by Modern Jewish tradition to the Bar Kokhba Revolt against the Roman Empire (132-135 CE).

Bonfires are used on farms, in large gardens and allotments to dispose of waste plant material that is not readily composted. This includes woody material, pernicious weeds, diseased material and material treated with persistent pesticides and herbicides. Such bonfires may be quite small but are often designed to burn slowly for several days so that wet and green material may be reduced to ash by frequently turning the unburnt material into the centre. Such bonfires can also deal with turf and other earthy material. The ash from garden bonfires is a useful source of potash and may be beneficial in improving the soil structure of some soils although such fires must be managed with safety in mind. Garden and farm bonfires are frequently smoky and can cause local nuisance if poorly managed or lit in unsuitable weather conditions.[1]