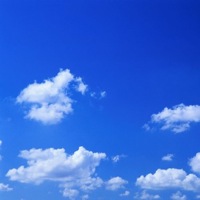 Middle English, from Anglo-French, from Latin aer, from Greek aēr

b : the mixture of invisible odorless tasteless gases (as nitrogen and oxygen) that surrounds the earth
c : a light breeze

b : nothingness <vanished into thin air>
c : a sudden severance of relations <she gave me the air>

a : tune, melody
b Elizabethan & Jacobean music : an accompanied song or melody in usually strophic form
c : the chief voice part or melody in choral music

b : a surrounding or pervading influence : atmosphere <an air of mystery>
c : the look, appearance, or bearing of a person especially as expressive of some personal quality or emotion : demeanor <an air of dignity>
d : an artificial or affected manner <put on airs>

Air is mainly composed of nitrogen, oxygen, and argon, which together constitute the major gases of the atmosphere. The remaining gases are often referred to as trace gases, among which are the greenhouse gases such as water vapor, carbon dioxide, methane, nitrous oxide, and ozone. Filtered air includes trace amounts of many other chemical compounds. Many natural substances may be present in tiny amounts in an unfiltered air sample, including dust, pollen and spores, sea spray, volcanic ash, and meteoroids. Various industrial pollutants also may be present, such as chlorine (elementary or in compounds), fluorine compounds, elemental mercury, and sulfur compounds such as sulfur dioxide [SO2].