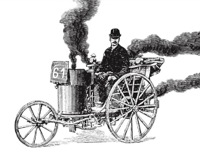 b : failure to progress or have effect : disintegration <a breakdown of negotiations>
c : a physical, mental, or nervous collapse
d : the process of decomposing
e : division into categories : classification; also : an account analyzed into categories

For lessons on the topic of Breakdown, follow this link.

Decomposition (or rotting) is the process by which organic material is broken down into simpler forms of matter. The process is essential for recycling the finite matter that occupies physical space in the biome. Bodies of living organisms begin to decompose shortly after death. Although no two organisms decompose in the same way, they all undergo the same sequential stages of decomposition. The science which studies decomposition is generally referred to as taphonomy from the Greek word taphos, meaning tomb.

One can differentiate abiotic from biotic decomposition (biodegradation). The former means "degradation of a substance by chemical or physical processes, eg hydrolysis). The latter one means "the metabolic breakdown of materials into simpler components by living organisms", typically by microorganisms.

Mental breakdown (also known as a nervous breakdown) is a non-medical term used to describe an acute, time-limited phase of a specific disorder that manifests primarily with features of depression or anxiety.

The terms "nervous breakdown" and "mental breakdown" have not been formally defined through a diagnostic system such as the DSM-IV or ICD-10, and are nearly absent from current scientific literature regarding mental illness. Although "nervous breakdown" does not necessarily have a rigorous or static definition, surveys of laypersons suggest that the term refers to a specific acute time-limited reactive disorder, involving symptoms such as anxiety or depression, usually precipitated by external stressors.

Specific cases are sometimes described as a "breakdown" only after a person becomes unable to function in day-to-day life.

A vehicle breakdown is the mechanical failure of a motor vehicle in such a way that the underlying problem prevents the vehicle from being operated at all, or impedes the vehicle's operation so much, that it is very difficult, nearly impossible, or else dangerous to operate. Vehicle breakdowns can occur for a large number of reasons. Depending on the nature of the problem, the vehicle may or may not need to be towed to an automobile repair shop.