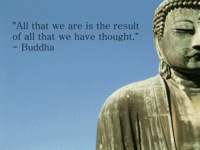 From its inception, Buddhism has had a strong philosophical component. Buddhism is founded on the rejection of certain orthodox philosophical concepts, in which the Buddha had been instructed by various teachers. The Buddha criticized all concepts of metaphysical being and non-being, and this critique is inextricable from the founding of Buddhism.

Particular points of Buddhist philosophizing have often been the subject of disputes between different schools of Buddhism. Readers should note that theory for its own sake is not valued in Buddhism, but theory pursued in the interest of enlightenment for oneself or others is fully consistent with Buddhist values and ethics.

Some have asserted that Buddhism as a whole is a practical philosophy rather than a religion. It is "practical" in that it has a specific method of application known as the Noble Eightfold Path (from which notions of divinity are entirely absent) of a particular set of philosophical principles (the Four Noble Truths). Proponents of such a view may argue that (a) Buddhism is non-theistic (i.e., it has no special use for the existence or non-existence of a god or gods (see non-theism)) or atheistic and (b) religions necessarily involve some form of theism. Others might contest either part of such an argument. Other arguments for Buddhism "as" philosophy may claim that Buddhism does not have doctrines in the same sense as other religions; the Buddha himself taught that a person should accept a teaching only if one's own experience verifies it, and if that teaching is "praised by the wise", as related in the Kalama Sutta of the Pali Canon.

Views presented in early Buddhist tradition tend to support the notion that Buddhism is a practical philosophy rather than a religion, viz the following excerpt from the Sisupacala Sutta:

"Under whom have you shaved your head?
You do appear to be a recluse,
Yet you don't approve of any creed,
So why wander as if bewildered?"

"Outside here the followers of creeds
Place their confidence in views.
I don't approve of their teachings;
They are not skilled in the Dhamma." [134]

Arguments against Buddhism as a philosophy might call attention to:

A third perspective might take the position that Buddhism can be practiced either as a religion or as a philosophy. A similar distinction is often made with reference to Taoism.

Lama Anagorika Govinda expressed it as follows in the book 'A Living Buddhism for the West':

"Thus we could say that the Buddha's Dharma is,
as experience and as a way to practical realisation, a religion;
as the intellectual formulation of this experience, a philosophy;
and as a result of self-observation and analysis, a psychology.
Whoever treads this path acquires a norm of behaviour that is not dictated from without, but is the result of an inner process of maturation and that we - regarding it from without - can call morality."

It should also be noted that in the South and East Asian cultures in which Buddhism achieved most of its development, the distinction between philosophy and religion is somewhat unclear and possibly quite spurious, so this may be a semantic problem arising in the West alone.

Decisive in distinguishing Buddhism from what is commonly called Hinduism is the issue of epistemological justification. The schools of Indian logic recognize a various sets of valid justifications for knowledge, or Pramana, while Buddhism recognizes a smaller set. Both accept perception and inference, for example, but for some schools (of Hinduism), the received textual tradition (e.g., the Vedas) is in itself an epistemological category equal to perception and inference (although this is not necessarily true for some other schools). Thus, in the orthodox schools, if a claim was made that could not be substantiated by appeal to the textual canon, it would be considered as ridiculous as a claim that the sky was green and, conversely, a claim which could not be substantiated via conventional means might still be justified through textual reference, differentiating this from the epistemology of hard science.

Some schools of Buddhism, on the other hand, rejected an inflexible reverence of accepted doctrine. As the Buddha is said to have said:

Other debates in metaphysics and phenomenology include the issue of the Pudgala, or "person", which was inserted by the Pudgalavada school to replace the ātman as that which transmigrates and that which carries the burden of karma from one life to another. Other schools made unsurprising objection to this. There were further sub-debates regarding whether the pudgala was real or illusory or something in between. The Yogacara school, somewhat later, would later elevate the mind to act as a substitute for Brahman, much as the Pudgala replaces the ātman. And the Tathagatagarbha (Buddha Essence) doctrine of Mahayana Buddhism would see the Buddha of those Tathagatagarbha sutras insisting that the atman (Self) lies at the very heart of the Buddha himself and of Nirvana (the two being One), as well as being concealed within the mass of mental/moral contaminants which blight all beings. In what claim to be the final Mahayana teachings of the Buddha, the eternal Self is distinguished from the five impermanent skandhas (constituents) which make up the non-Self or worldly ego, and the True Self is identified as the Dharmakaya of the Buddha in deathless Nirvana. Such doctrines saw a shift from a largely apophatic (negative) philosophical trend within Buddhism to a decidedly more cataphatic (positive) modus.

In many or all of these debates, some would point out the irony of pursuing questions which the Buddha of the agamas / Pali suttas was often prone to refuse to answer, on the grounds that they were non-conducive to enlightenment. The Buddha of the Mahayana, however, would on occasion take a different stand and speak of allegedly higher doctrines suitable for the more advanced of his monks.

For more detailed information, see Schools of Buddhism, Mahayana, Tathagatagarbha and articles devoted to the individual schools themselves.

The original positive Buddhist contribution to the field of metaphysics is pratītyasamutpāda, which arises from the Buddhist critique of Indian theories of causality. It states that events are not predetermined, nor are they random, and it rejects notions of direct causation owing to the need for such theories in the Indian context to be undergirded by a substantialist metaphysics. Instead, it posits the arising of events under certain conditions which are inextricable, such that the units in question at no time have independent existence. Pratitya-samutpada goes on to posit that certain specific events, concepts, or realities are always dependent on other specific things. Craving, for example, is always dependent on, and caused by, emotion. Emotion is always dependent on contact with our surroundings. This chain of causation purports to show that the cessation of decay, death, and sorrow is indirectly dependent on the cessation of craving, and ultimately dependent on an all-encompassing stillness.

Nagarjuna, one of the most influential Buddhist philosophers, asserted a direct connection between, even identity of, dependent origination, anatta, and śūnyatā. He pointed out that implicit in the early Buddhist concept of dependent origination is the lack of any substantial being (anatta) underlying the participants in origination, so that they have no independent existence, a state identified as emptiness (śūnyatā), or emptiness of a nature or essence (sva-bhāva). This element of Nagarjuna's thought is relatively uncontroversial, but it opens the way for his identification of saṃsāra and nirvana, which was revolutionary.

This doctrine comes from the Avatamsaka Sutra and its associated schools. It holds that all phenomena are intimately connected. Two images are used to convey this idea. The first is known as Indra's net. The net is set with jewels which have the extraordinary property that they reflect all of the other jewels. The second image is that of the world text. This image portrays the world as consisting of an enormous text which is as large as the universe itself. The 'words' of the text are composed of the phenomena that make up the world. However, every atom of the world contains the whole text within it. It is the work of a Buddha to let out the text so that beings can be liberated from suffering.

This idea was enormously influential on the Japanese monk Kūkai in founding the Shingon school of Buddhism.

Although there are many ethical tenets in Buddhism that differ depending on whether one is a monk or a layman, and depending on individual schools, the Buddhist system of ethics can always be summed up in the Eightfold Path.

The purpose of living an ethical life is to escape the suffering inherent in Samsara. Although early Buddhism (Hinayana) is contrasted with later Buddhism (Mahayana) in that the latter emphasizes striving for the enlightenment of all (apparent) beings rather than simply oneself, in neither case can the motivation for ethical living be called 'selfish', because Buddhist doctrine holds the notion of a 'self' to be illusory.

Buddhist teachings claim that there is no real difference between ourselves and others; therefore one should attempt to increase the happiness of all living things as eagerly as one's own. This is why some Buddhists choose to be vegetarians.

The philosophical outlook of Earliest Buddhism was primarily negative, in the sense that it focused on what doctrines to reject more than on what doctrines to accept. This dimension has been preserved by the Madhyamaka school. It includes critical rejections of all views, which is a form of philosophy, but it is reluctant to posit its own. Only knowledge that is useful in achieving enlightenment is valued. The cycle of philosophical upheavals that in part drove the diversification of Buddhism into its many schools and sects only began once Buddhists began attempting to make explicit the implicit philosophy of the Buddha and the early Suttas.

After the death of the Buddha, attempts were made to gather his teachings and transmit them in a commonly agreed form, first orally, then also in writing (The Tripitaka). In addition to collecting the Buddha's speeches and rules for monastic life (Vinaya), monks soon undertook to condense what they considered the essential elements of Buddhist doctrine into lists of categories, provided with extensive commentary. This process took shape from about the 2nd century BCE to probably the 2nd century CE.

Very soon after, additional teachings began to be added to the list of important Buddhist texts. Many of these altered and refined Buddhist philosophy.

Comparison with other philosophies