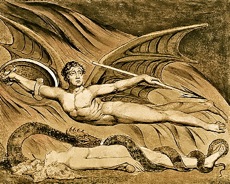 Caligastia was a Lanonandek Son, number 9,344 of the secondary order. He was experienced in the administration of the affairs of the local universe in general and, during later ages, with the management of the local system of Satania in particular.

Prior to the reign of Lucifer in Satania, Caligastia had been attached to the council of the Life Carrier advisers on Jerusem. Lucifer elevated Caligastia to a position on his personal staff, and he acceptably filled five successive assignments of honor and trust.

Caligastia very early sought a commission as Planetary Prince, but repeatedly, when his request came up for approval in the constellation councils, it would fail to receive the assent of the Constellation Fathers. Caligastia seemed especially desirous of being sent as planetary ruler to a decimal or life-modification world. His petition had several times been disapproved before he was finally assigned to Urantia.

Caligastia went forth from Jerusem to his trust of world dominion with an enviable record of loyalty and devotion to the welfare of the universe of his origin and sojourn, notwithstanding a certain characteristic restlessness coupled with a tendency to disagree with the established order in certain minor matters.

I was present on Jerusem when the brilliant Caligastia departed from the system capital. No prince of the planets ever embarked upon a career of world rulership with a richer preparatory experience or with better prospects than did Caligastia on that eventful day one-half million years ago. One thing is certain: As I executed my assignment of putting the narrative of that event on the broadcasts of the local universe, I never for one moment entertained even in the slightest degree any idea that this noble Lanonandek would so shortly betray his sacred trust of planetary custody and so horribly stain the fair name of his exalted order of universe sonship. I really regarded Urantia as being among the five or six most fortunate planets in all Satania in that it was to have such an experienced, brilliant, and original mind at the helm of world affairs. I did not then comprehend that Caligastia was insidiously falling in love with himself; I did not then so fully understand the subtleties of personality pride. [1]