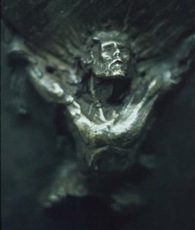 Lucifer was a brilliant primary Lanonandek Son of Nebadon. He had experienced service in many systems, had been a high counselor of his group, and was distinguished for wisdom, sagacity, and efficiency. Lucifer was number 37 of his order, and when commissioned by the Melchizedeks, he was designated as one of the one hundred most able and brilliant personalities in more than seven hundred thousand of his kind. From such a magnificent beginning, through evil and error, he embraced sin and now is numbered as one of three System Sovereigns in Nebadon who have succumbed to the urge of self and surrendered to the sophistry of spurious personal liberty--rejection of universe allegiance and disregard of fraternal obligations, blindness to cosmic relationships.

Lucifer was not an ascendant being; he was a created Son of the local universe, and of him it was said: "You were perfect in all your ways from the day you were created till unrighteousness was found in you." Many times had he been in counsel with the Most Highs of Edentia. And Lucifer reigned "upon the holy mountain of God," the administrative mount of Jerusem, for he was the chief executive of a great system of 607 inhabited worlds.

For lessons on the topic of Lucifer, follow this link.

Lucifer was a magnificent being, a brilliant personality; he stood next to the Most High Fathers of the constellations in the direct line of universe authority. Notwithstanding Lucifer's transgression, subordinate intelligences refrained from showing him disrespect and disdain prior to Michael's bestowal on Urantia. Even the archangel of Michael, at the time of Moses' resurrection, "did not bring against him an accusing judgment but simply said, `the Judge rebuke you.'" Judgment in such matters belongs to the Ancients of Days, the rulers of the superuniverse.

Of Lucifer it was said: "Your heart was lifted up because of your beauty; you corrupted your wisdom because of your brightness." Your olden prophet saw his sad estate when he wrote: "How are you fallen from heaven, O Lucifer, son of the morning! How are you cast down, you who dared to confuse the worlds!"

Very little was heard of Lucifer on Urantia owing to the fact that he assigned his first lieutenant, Satan, to advocate his cause on your planet. Satan was a member of the same primary group of Lanonandeks but had never functioned as a System Sovereign; he entered fully into the Lucifer insurrection. The "devil" is none other than Caligastia, the deposed Planetary Prince of Urantia and a Son of the secondary order of Lanonandeks. At the time Michael was on Urantia in the flesh, Lucifer, Satan, and Caligastia were leagued together to effect the miscarriage of his bestowal mission. But they signally failed.

Abaddon was the chief of the staff of Caligastia. He followed his master into rebellion and later acted as chief executive of the Urantia rebels. Beelzebub was the leader of the disloyal midway creatures who allied themselves with the forces of the traitorous Caligastia.

The dragon eventually became the symbolic representation of all these evil personages. Upon the triumph of Michael, "Gabriel came down from Salvington and bound the dragon (all the rebel leaders) for an age." Of the Jerusem seraphic rebels it is written: "And the angels who kept not their first estate but left their own habitation, he has reserved in sure chains of darkness to the judgment of the great day."[1]