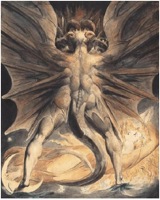 Beelzebub, prince of devils, from Latin, from Greek Beelzeboub, from Hebrew Baʽal zĕbhūbh, a Philistine god, literally, lord of flies

Beelzebub (pron. BEEL-zə-bub); (Hebrew: בַּעַל זְבוּב‎, Baʿal Zəvûv; Arabic: بعل الذباب‎, Ba‘al adh-Dhubāb; literally "Lord of the Flies"; Greek: Βεελζεβούλ, Velzevoúl; Latin: Beelzebūb), with numerous archaic variants, is a Semitic deity that was worshiped in the Philistine city of Ekron. In later Christian and Biblical sources, he is referred to as another name for Devil, and in Christian demonology, is one of the seven princes of Hell according to Christian views on Hell.

Rabbinical commentary equates Baal Zebub of Ekron as lord of the "fly." The word Ba‘al Zebûb in rabbinical texts is a mockery of the Ba'al religion, which ancient Hebrews considered to be idol (or false God) worship. Jewish scholars have interpreted the title of "Lord of Flies" as the Hebrew way of calling Ba'al a pile of dung and comparing Ba'al followers to flies.[1]

53:1.5 Abaddon was the chief of the staff of Caligastia. He followed his master into rebellion and has ever since acted as chief executive of the Urantia rebels. Beelzebub was the leader of the disloyal midway creatures who allied themselves with the forces of the traitorous Caligastia.

77:7.4 These disloyal midwayers were able to reveal themselves to mortal eyes under certain circumstances, and especially was this true of the associates of Beelzebub, the leader of the apostate secondary midwayers. But these unique creatures must not be confused with certain of the rebel cherubim and seraphim who also were on earth up to the time of Christ' s death and resurrection. Some of the older writers designated these rebellious midway creatures as evil spirits and demons, and the apostate seraphim as evil angels.