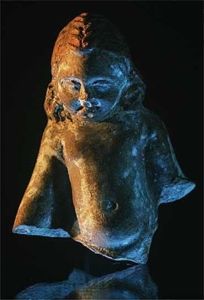 The Philistines (Hebrew פלשתים, plishtim) (see "other uses" below) were a people who inhabited the southern coast of Canaan, their territory being named Philistia in later contexts. Their origin has been debated among scholars, but modern archaeology has suggested early cultural links with the Mycenean world in mainland Greece. Though the Philistines adopted local Canaanite culture and language before leaving any written texts, an Indo-European origin has been suggested for a handful of known Philistine words (See Philistine language).

The etymology of the word into English is from Old French Philistin, from Late Latin Philistinus, from Late Greek Philistinoi, from Hebrew P'lishtim, (See, e.g., 1 Samuel 17:26, 17:36; 2 Samuel 1:20; Judges 14:3)."people of P'lesheth" ("Philistia"); cf. Akkadian Palastu, Egyptian Palusata; the word probably is the people's name for itself. Etymology Online cf. the semitic root Pelesh (פלש) which means to divide, go through, to roll in, cover or invade. (Jastrow, Marcus. A Dictionary of the Targumim, the Talmud Babli and Yerushalmi, and the Midrashic Literature. New York: Judaica Press, 1989., p.1185)

If the Philistines are to be identified as one of the "Sea Peoples" (see Origins below), then their occupation of Canaan would have to have taken place during the reign of Ramesses III of the Twentieth Dynasty, ca. 1180 to 1150 BC. Their maritime knowledge presumably would have made them important to the Phoenicians.

In Egypt, a people called the "Peleset" (or, more precisely, prst), generally identified with the Philistines, appear in the Medinet Habu inscription of Ramesses III Texts from the Medinet Habu Temple with Reference to the Sea Peoples, where he describes his victory against the Sea Peoples, as well as the Onomasticon of Amenope (late Twentieth Dynasty) and Papyrus Harris I, a summary of Ramesses III's reign written in the reign of Ramesses IV. Nineteenth-century Bible scholars identified the land of the Philistines (Philistia) with Palastu and Pilista in Assyrian inscriptions, according to Easton's Bible Dictionary (1897).

The Philistines occupied the five cities of Gaza, Ashkelon, Ashdod, Ekron, and Gath, along the coastal strip of southwestern Canaan, that belonged to Egypt up to the closing days of the Nineteenth Dynasty (ended 1185 BC). The biblical stories of Samson, Samuel, Saul and David include accounts of Philistine-Israelite conflicts. The Philistines long held a monopoly on iron smithing (a skill they possibly acquired during conquests in Anatolia), and the biblical description of Goliath's armor is consistent with this iron-smithing technology.

This powerful association of tribes made frequent incursions against the Hebrews. There was almost perpetual war between the two peoples. The Philistine cities were ruled by seranim (סְרָנִים, "lords"), who acted together for the common good, though to what extent they had a sense of a "nation" is not clear without literary sources. After their defeat by the Hebrew king David, who originally for a time worked as a mercenary for Achish of Gath, kings replaced the seranim, governing from various cities. Some of these kings were called Abimelech, which was initially a name and later a dynastic title.

The Philistines lost their independence to Tiglath-Pileser III of Assyria by 732 BC, and revolts in following years were all crushed. Later, Nebuchadrezzar II of Babylon eventually conquered all of Syria and the Kingdom of Judah, and the former Philistine cities became part of the Neo-Babylonian Empire. There are few references to the Philistines after this time period. However, Ezekiel 25:16, Zechariah 9:6, and I Macabees 3 make mention of the Philistines, indicating that they still existed as a people in some capacity after the Babylonian invasion. Eventually all traces of the Philistines as a people or ethnic group disappear. Subsequently the cities were under the control of Persians, Jews (Hasmonean Kingdom), Greeks (Seleucid Empire), Romans, and subsequent empires.

The name "Palestine" comes, via Greek and Latin, from the Philistines; see History of Palestine.

Origin of the Philistines

Most authorities agree that the Philistines are not autochthonous to the regions of Israel/Palestine which the Bible describes them inhabiting. The Bible contains roughly 250 references to the Philistines or Philistia, and repeatedly refers to them as "uncircumcised", unlike the Semitic peoples, such as Canaanites, which the Bible relates encountered the Israelites following the Exodus. (See, e.g., 1 Samuel 17:26, 17:36; 2 Samuel 1:20; Judges 14:3).

It has been suggested that the Philistines formed part of the great naval confederacy, the "Sea Peoples," who had wandered, at the beginning of the 12th century BC, from their homeland in Crete and the Aegean islands to the shores of the Mediterranean and repeatedly attacked Egypt during the later Nineteenth Dynasty. Though they were eventually repulsed by Ramesses III, he finally resettled them, according to the theory, to rebuild the coastal towns in Canaan.

Papyrus Harris I details the achievements of the reign of Ramesses III. In the brief description of the outcome of the battles in Year 8 is the description of the fate of the Sea Peoples. Ramesses tells us that, having brought the imprisoned Sea Peoples to Egypt, he "settled them in strongholds, bound in my name. Numerous were their classes like hundred-thousands. I taxed them all, in clothing and grain from the storehouses and granaries each year." Some scholars suggest it is likely that these "strongholds" were fortified towns in southern Canaan, which would eventually become the five cities (the Pentapolis) of the Philistines (Redford 1992, p. 289). Israel Finkelstein has suggested that there may be a period of 25-50 years after the sacking of the Philistine cities and their reoccupation by the Philistines. It is quite possible that for the initial period of time, the Philistines were housed in Egypt, only subsequently late in the troubled end of the reign of Rameses III would they have been allowed to settle Philistia.

The connection between Mycenean culture and Philistine culture was made clearer by finds at the excavation of Ashdod, Ekron, Ashkelon, and more recently Tell es-Safi (probably Gath), four of the five Philistine cities in Canaan. The fifth city is Gaza. Especially notable is the early Philistine pottery, a locally-made version of the Aegean Mycenaean Late Helladic IIIC pottery, which is decorated in shades of brown and black. This later developed into the distinctive Philistine pottery of the Iron Age I, with black and red decorations on white slip. Also of particular interest is a large, well-constructed building covering 240 square meters, discovered at Ekron. Its walls are broad, designed to support a second story, and its wide, elaborate entrance leads to a large hall, partly covered with a roof supported on a row of columns. In the floor of the hall is a circular hearth paved with pebbles, as is typical in Mycenean megaron hall buildings; other unusual architectural features are paved benches and podiums. Among the finds are three small bronze wheels with eight spokes. Such wheels are known to have been used for portable cultic stands in the Aegean region during this period, and it is therefore assumed that this building served cultic functions. Further evidence concerns an inscription in Ekron to PYGN or PYTN, which some have suggested refers to "Potnia," the title given to an ancient Mycenaean goddess. Excavations in Ashkelon, Ekron, and Gath reveal dog and pig bones which show signs of having been butchered, implying that these animals were part of the residents' diet.

One name the Greeks used for the previous inhabitants of Greece and the Aegean was Pelasgians, but no definite connection has been established between this name and that of the Philistines. The theory that the Sea Peoples included Greek-speaking tribes has been developed even further to postulate that the Philistines originated in either western Anatolia or the Greek peninsula.

There is some limited evidence in favor of the assumption that the Philistines did originally speak some Indo-European language. A number of Philistine-related words found in the Bible are not Semitic, and can in some cases, with reservations, be traced back to Proto-Indo-European roots. For example, the Philistine word for captain, seren, may be related to the Greek word tyrannos (which, however, has not been traced to a PIE root). Some of the Philistine names, such as Goliath, Achish, and Phicol, appear to be of non-Semitic origin, and Indo-European etymologies have been suggested. Recently, an inscription dating to the late 10th/early 9th centuries BC with two names, very similar to one of the suggested etymologies of the popular Philistine name Goliath (Lydian Alyattes/Wylattes) was found in the excavations at Tell es-Safi/Gath. The appearance of additional non-Semitic names in Philistine inscriptions from later stages of the Iron Age is an additional indication of the non-Semitic origins of this group.

Statements in the Bible

The Hebrew tradition recorded in Genesis 10:14 states that the "Pelishtim" (פְּלִשְׁתִּים, Standard Hebrew /pəlištim/, Tiberian Hebrew /pəlištîm/) proceeded from the "Pathrusim" (פַּתְרֻסִים) and the "Casluhim" (כַּסְלֻחִים), who descended from Mizraim (מִצְרַיִם, Egypt), son of Ham. The Philistines settled "Pelesheth" (פְּלֶשֶׁת, Standard Hebrew /pəléšet/ or /pəlášet/, Tiberian Hebrew /pəléšeṯ/ or /Pəlāšeṯ/) along the eastern Mediterranean coast at about the time when the Israelites settled in the Judean highlands. Biblical references to Philistines living in the area before this, at the time of Abraham or Isaac (e.g. Gen. 21:32-34), are generally regarded by modern scholars to be anachronisms.

The Philistines are spoken of in the Book of Amos as originating in Caphtor: "saith the LORD: Have not I brought up Israel out of the land of Egypt? and the Philistines from Caphtor, and Aram from Kir?" (Amos 9:7). Later, in the 7th century BC, Jeremiah makes the same association with Caphtor. "For the LORD will spoil the Philistines, the remnant of the country of Caphtor, (Jeremiah 47:4). Scholars variously identify the land of Caphtor with Cyprus and Crete and other locations in the eastern Mediterranean.

Other uses of the term 'Philistine'