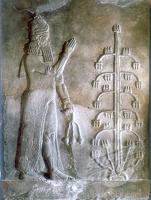 While the term Semite means a member of any of various ancient and modern Semitic-speaking peoples originating in southwestern Asia, including Akkadians, Canaanites, Phoenicians, Hebrews, Arabs, and Ethiopian Semites, it was proposed at first to refer to the languages related to Hebrew by Ludwig Schlözer, in Eichhorn's "Repertorium", vol. VIII (Leipzig, 1781), p. 161. Through Eichhorn the name then came into general usage (cf. his "Einleitung in das Alte Testament" (Leipzig, 1787), I, p. 45). In his "Gesch. der neuen Sprachenkunde", pt. I (Göttingen, 1807) it had already become a fixed technical term.

The word "Semitic" is an adjective derived from Shem, one of the three sons of Noah in the Bible (Genesis 5.32, 6.10, 10.21), or more precisely from the Greek derivative of that name, namely Σημ (Sēm); the noun form referring to a person is Semite.

b : a descendant of these peoples

In linguistics and ethnology, Semitic (from the Biblical "Shem", Hebrew: שם‎, translated as "name", Arabic: ساميّ‎) was first used to refer to a language family of largely Middle Eastern origin, now called the Semitic languages. This family includes the ancient and modern forms of Akkadian, Amharic, Arabic, Aramaic, Ge'ez, Hebrew, Maltese, Phoenician, Tigre and Tigrinya among others.

As language studies are interwoven with cultural studies, the term also came to describe the extended cultures and ethnicities, as well as the history of these varied peoples as associated by close geographic and linguistic distribution.

The hypothetical Proto-Semitic language, ancestral to historical Semitic languages in the Middle East, is thought to have been originally from either the Arabian Peninsula (particularly around Yemen) or the adjacent Ethiopian highlands. But its region of origin is still much debated and uncertain with, for example, a recent bayesian analysis identifying an origin for Semitic languages in the Levant around 5,750 BP with a single introduction from southern Arabia into Africa around 2,800 BP. The Semitic language family is also considered a component of the larger Afroasiatic macro-family of languages. Identification of the hypothetical proto-Semitic region of origin is therefore dependent on the larger geographic distributions of the other language families within Afroasiatic.

In a religious context, the term 'Semitic' can refer to the religions associated with the speakers of these languages: thus Judaism, Christianity and Islam are often described as "Semitic religions" (irrespective of language family spoken by their adherents). Manicheanism and the Mandean religion also fall within this category.