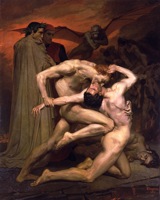 An alternative derivation < the Germanic base of Old Icelandic hella flat stone, hallr stone, boulder, hill, Gothic hallus rock (of uncertain origin, perhaps ultimately < the same Indo-European base as HILL n.), suggesting that the underworld was imagined as covered by a stone, is not generally accepted.

For lessons on the topic of Hell, follow this link.

b Christian Science : error 2b, sin

b : a place or state of turmoil or destruction <all hell broke loose>
c : a severe scolding; also : flak, grief <gave me hell for coming in late>
d : unrestrained fun or sportiveness <the kids were full of hell> —often used in the phrase for the hell of it especially to suggest action on impulse or without a serious motive <decided to go for the hell of it>
e : an extremely unpleasant and often inescapable situation <rush-hour hell>

In many religious traditions, Hell is a place of suffering and punishment in the afterlife. Religions with a linear divine history often depict Hell as endless. Religions with a cyclic history often depict Hell as an intermediary period between incarnations. Typically these traditions located Hell under the external core of the Earth's surface and often included entrances to Hell from the land of the living. Other afterlife destinations included Heaven, Purgatory, Paradise, Nirvana, and Limbo.

Other traditions, which did not conceive of the afterlife as a place of punishment or reward, merely described it as an abode of the dead — a neutral place located under the surface of Earth (for example, see sheol and Hades).

Modern understandings of Hell often depict it abstractly, as a state of loss rather than as fiery torture literally underground, but this view of hell can, in fact, be traced back into the ancient and medieval periods as well.

Hell is often portrayed as populated with demons, who torment the damned. Many are ruled by a death god, such as Nergal, Hades, Yama or the Christian/Islamic Devil, called Satan or Lucifer.[1]