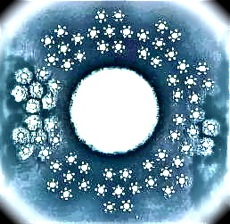 The headquarters of Nebadon - space defined by the presence of the Creative Spirit or the Divine Minister of Salvington.

Salvington, the headquarters of Nebadon, is situated at the exact energy-mass center of the local universe. But your local universe is not a single astronomic system, though a large system does exist at its physical center.

Salvington is the personal headquarters of Michael of Nebadon, but he will not always be found there. While the smooth functioning of your local universe no longer requires the fixed presence of the Creator Son at the capital sphere, this was not true of the earlier epochs of physical organization. A Creator Son is unable to leave his headquarters world until such a time as gravity stabilization of the realm has been effected through the materialization of sufficient energy to enable the various circuits and systems to counterbalance one another by mutual material attraction.

Presently, the physical plan of a universe is completed, and the Creator Son, in association with the Creative Spirit, projects his plan of life creation; whereupon does this representation of the Infinite Spirit begin her universe function as a distinct creative personality. When this first creative act is formulated and executed, there springs into being the Bright and Morning Star, the personification of this initial creative concept of identity and ideal of divinity. This is the chief executive of the universe, the personal associate of the Creator Son, one like him in all aspects of character, though markedly limited in the attributes of divinity.

And now that the right-hand helper and chief executive of the Creator Son has been provided, there ensues the bringing into existence of a vast and wonderful array of diverse creatures. The sons and daughters of the local universe are forthcoming, and soon thereafter the government of such a creation is provided, extending from the supreme councils of the universe to the fathers of the constellations and the sovereigns of the local systems—the aggregations of those worlds which are designed subsequently to become the homes of the varied mortal races of will creatures; and each of these worlds will be presided over by a Planetary Prince.

And then, when such a universe has been so completely organized and so repletely manned, does the Creator Son enter into the Father's proposal to create mortal man in their divine image.

The organization of planetary abodes is still progressing in Nebadon, for this universe is, indeed, a young cluster in the starry and planetary realms of Orvonton. At the last registry there were 3,840,101 inhabited planets in Nebadon, and Satania, the local system of your world, is fairly typical of other systems.[1]