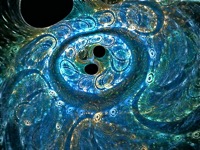 In its most general sense, a cosmos is an orderly or harmonious system. It originates from a Greek term κόσμος meaning "order, orderly arrangement, ornaments," and is the antithetical concept of chaos. The word cosmetics originates from the same root.

Pythagoras is said to have been the first philosopher to apply the term to the Universe, perhaps from application to the starry firmament. The term so used is parallel to the Zoroastrian term aša, the concept of a divine order, or divinely ordered creation.

In theology, the term can be used to denote the created universe, not including the creator. The Septuagint uses both kosmos and oikumene for the inhabited world. In Christian theology, the word was also used synonymously with aion to refer to "worldly life" or "this world" as opposed to the afterlife. In philosophical use, the words "absolute", cosmos, and universe can be employed synonymously to include all that exists.

Cosmology is the study of the cosmos in several of the above meanings, depending on context. All cosmologies have in common an attempt to understand the implicit order within the whole of being. In this way, most religions and philosophical systems have a cosmology.

The philosopher Ken Wilber uses the term kosmos to refer to all of manifest existence, including various realms of consciousness. The term kosmos so used distinguishes a nondual universe (which, on his view, includes both noetic and physical aspects) from the strictly physical universe that is the concern of the traditional sciences. In physical cosmology, it is often used in a technical way, referring to a space-time continuum.

The Daynal Institute blog is Cosmographia