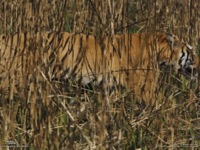 Camouflage is a method of crypsis – avoidance of observation – that allows an otherwise visible organism or object to remain indiscernible from the surrounding environment through deception. Examples include a tiger's stripes and the battledress of a modern soldier. The theory of camouflage covers the various strategies which are used to achieve this effect.

Cryptic coloration is the most common form of camouflage, found to some extent in the majority of species. The simplest way is for an animal to be of a color similar to its surroundings. Examples include the "earth tones" of deer, squirrels, or moles (to match trees or dirt), or the combination of blue skin and white underbelly of sharks via countershading (which makes them difficult to detect from both above and below). More complex patterns can be seen in animals such as flounder, moths, and frogs, among many others.[1]