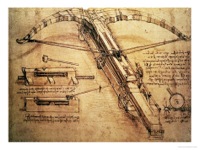 The word 'catapult' comes from the Latin 'catapulta', which in turn comes from the Greek καταπέλτης (katapeltēs), itself from (kata), "downwards" + πάλλω (pallō), "to toss, to hurl"

A catapult is a device used to throw or hurl a projectile a great distance without the aid of explosive devices—particularly various types of ancient and medieval siege engines. Although the catapult has been used since ancient times, it has proven to be one of the most effective mechanisms during warfare. Catapults were invented by the ancient Greeks.[1]