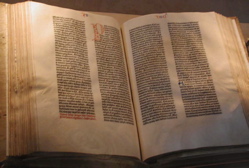 The Bible as used by the majority of Christians includes the Rabbinic Hebrew Scripture and the New Testament, which relates the life and teachings of Jesus, the letters of the Apostle Paul and other disciples to the early church and the Book of Revelation.

The New Testament is a collection of 27 books, of 4 different genres of Christian literature (Gospels, one account of the Acts of the Apostles, Epistles and an Apocalypse). While Jesus is a central figure, Paul's writing dominates the collection. The New Testament was written primarily in Greek in the early Christian period. Nearly all Christians recognize the New Testament as canonical scripture.

Probably, the books of the New Testament were written in Greek, the language of the earliest extant manuscripts, even though some authors often included translations from Hebrew and Aramaic texts. Certainly the Pauline Epistles were written in Greek for Greek-speaking audiences. Some scholars believe that some books of the Greek New Testament (in particular, the Gospel of Matthew) are actually translations of a Hebrew or Aramaic original. Of these, a small number accept the Syriac Peshitta as representative of the original.

This category has the following 2 subcategories, out of 2 total.

The following 29 pages are in this category, out of 29 total.