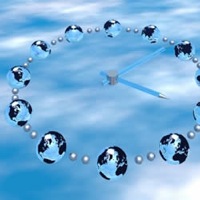 New Latin chronologia, from chron- + -logia -logy. from Ancient Greek χρόνος, chronos, "time"; and -λογία, -logia) is a chronicle or arrangement of events in their order of occurrence in time,

A chronology may be either relative—that is, locating related events relative to each other—or absolute—locating these events to specific dates in a chronological era. Even this distinction may be blurred by use of different calendars. In Judeo-Christian cultures, historical dates in an absolute chronology are understood to be referred to the Christian era, in combination with the proleptic Julian calendar (originally) and the Gregorian calendar respectively.

Chronology is the science of locating historical events in time, and is distinct from, but relies upon chronometry or timekeeping, and historiography, which examines the writing of history and the use of historical methods. Radiocarbon dating estimates the age of formerly living things by measuring the proportion of carbon-14 isotope in their carbon content. Dendrochronology estimates the age of trees by correlation of the various growth rings in their wood to known year-by-year reference sequences in the region to reflect year-to-year climatic variation. Dendrochronology is used in turn as a calibration reference for radiocarbon dating curves.