From Nordan Symposia
(Redirected from Courageous)
Jump to navigationJump to search 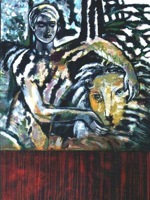 For lessons on the topic of Courage, follow this link.

As a virtue, courage is discussed extensively in Aristotle's Nicomachean Ethics, where its vice of deficiency is cowardice and its vice of excess are recklessness.[1]

Søren Kierkegaard opposed courage to angst, while Paul Tillich opposed an existential courage to be to non-being, fundamentally equating it with religion:

"Courage is the self-affirmation of being in spite of the fact of non-being. It is the act of the individual self in taking the anxiety of non-being upon itself by affirm ing itself ... in the anxiety of guilt and condemnation. ... every courage to be has openly or covertly a religious root. For religion is the state of being grasped by the power of being itself."[5]

J.R.R. Tolkien identified in his 1936 lecture "Beowulf: The Monsters and the Critics" a "Northern 'theory of courage'"—the heroic or "virtuous pagan" insistence to do the right thing even in the face of certain defeat without promise of reward or salvation:

"It is the strength of the northern mythological imagination that it faced this problem, put the monsters in the centre, gave them victory but no honour, and found a potent and terrible solution in naked will and courage. 'As a working theory absolutely impregnable.' So potent is it, that while the older southern imagination has faded forever into literary ornament, the northern has power, as it were, to revive its spirit even in our own times. It can work, as it did even with the goðlauss Viking, without gods: martial heroism as its own end.[6]”

Virtuous pagan heroism or courage in this sense is "trusting in your own strength," as observed by Jacob Grimm in his Teutonic Mythology,

“Men who, turning away in utter disgust and doubt from the heathen faith, placed their reliance on their own strength and virtue. Thus in the Sôlar lioð 17 we read of Vêbogi and Râdey â sik þau trûðu, "in themselves they trusted"[7]”

Civil courage (sometimes also referred to as "Social courage") is defined by many different standards. In general, the term is usually referred to when civilians stand up against something that is deemed unjust and evil, knowing that the consequences of their action might lead to their death, injury or some other form of significant harm.

In some countries (e.g. Brazil, France and Germany) civil courage is enforced by law; this means that if a crime is committed in public, the public is obliged to act, either by alerting the authorities, or by intervening in the conflict. If the crime is committed in a private environment, those who witness the crime must either report it to the authorities or attempt to stop it.

Its accompanying animal is the lion. Often, Fortitude is depicted as having tamed the ferocious lion. Cf. e.g. the Tarot trump called Strength. It is sometimes seen as a depiction of the Catholic Church's triumph over sin. It also is a symbol in some cultures as a savior of the people who live in a community with sin and a corrupt church or religious body.

b. Formerly also in pl. in reference to a number of persons. (Cf. hearts.) Obs.
c. (with a and pl.) A kind or species of courage; an instance of courage. rare.
d. Phrases, as to take courage, be of good c. (obs. or arch.), pluck up c., lose c., etc. Dutch courage: bravery induced by drinking (colloq.). the courage of one's convictions or opinions [F. le courage de son opinion, cited 1864]: courage in action equal to the courageousness of one's opinion; courage to act consistently with one's opinions.
e. As an exclamation: = Take courage! Cheer up!