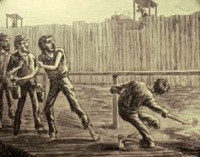 The term deadline originated from prison camps during war, and referred to a physical line or boundary. Guards would shoot any prisoner who crossed the deadline. The "deadline" in such prison camps as Confederate Prison Camp Andersonville or Union Prison Camp Douglas Chicago during the Civil War was "Inside (the wall), about 19 feet from the wall,” which prisoners were forbidden to cross. The "deadline" was intended to prevent prisoners from climbing over the stockade or from tunneling under it. The term was later adapted in its use to time lines, perhaps to show the seriousness of an end date in a timeline by referring to it as a "deadline."

b : the time after which copy is not accepted for a particular issue of a publication.

A time limit or deadline is a narrow field of time, or a particular point in time, by which an objective or task must be accomplished. Once that time has passed, the item may be considered overdue (e.g., for work projects or school assignments). In the case of work assignments or projects that are not completed by the deadline, this may adversely affect the employee's performance rating. In the case of school assignments, essays or reports submitted after the deadline, marks or grades may be deducted from the student's assessment.

In some cases, no materials can be submitted after the deadline. This may occur with Calls for Proposal, commercial tenders for bids, and application dates for universities and professional schools. For tests and examinations in schools, universities and job competitions, once the time limit for the test is up, the test-takers must put down their pens or pencils and hand in their test.

In project management, deadlines are most often associated with milestone goals.