From Nordan Symposia
(Redirected from Debts)
Jump to navigationJump to search 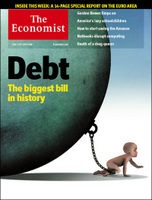 Middle English dette, debte, from Anglo-French dette something owed, from Vulgar Latin *debita, from Latin, plural of debitum debt, from neuter of debitus, past participle of debēre to owe, from de- + habēre to have. The letter b in the word debt was reintroduced in the 17th century, possibly by Samuel Johnson in his Dictionary of 1755— several other words that had existed without a b had them reinserted at around that time.

For lessons on the topic of Debt, follow this link.

Debt is that which is owed; usually referencing assets owed, but the term can also cover moral obligations and other interactions not requiring money. In the case of assets, debt is a means of using future purchasing power in the present before a summation has been earned. Some companies and corporations use debt as a part of their overall corporate finance strategy.

A debt is created when a creditor agrees to lend a sum of assets to a debtor. In modern society, debt is usually granted with expected repayment; in most cases, plus interest. Historically, debt was responsible for the creation of indentured servants.