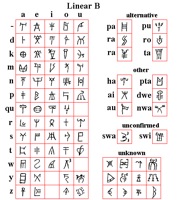 b : to interpret the meaning of

Decipherment is the analysis of documents written in ancient languages, where the language is unknown, or knowledge of the language has been lost.

It is closely related to cryptanalysis — the difference being that the original document was not deliberately written to be difficult to decipher.

The term has also been used to describe the analysis of the genetic information encoded in DNA - see the Human Genome Project article for more on this.

Some people have also used the word metaphorically to mean something like 'understanding'.