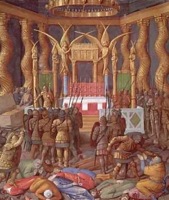 Desecration (also called desacralization or desanctification) is the act of depriving something of its sacred character, or the disrespectful or contemptuous treatment of that which is held to be sacred or holy by a group or individual.

Many consider acts of desecration to be sacrilegious acts. This can include desecration of sacred books, sacred places or sacred objects. Desecration generally may be considered from the perspective of a particular religion or spiritual activity. Desecration may be applied to natural systems or components, particularly if those systems are part of naturalistic spiritual religion.

To respectfully remove the sacred character of a place or an object is deconsecration, and is distinct from desecration.

Some religions, such as the Roman Catholic Church have specific rules as to what constitutes desecration and what should be done in these circumstances.

Even in the late 20th and 21st century, desecrations are still taking place in some parts of the world, notably in countries ruled by religious fundamentalists, such as the destruction of the Buddhas of Bamyan by the Taliban in March 2001. Also, in Europe, in disputed region of Kosovo, only during violent unrests in 2004, more than 35 Orthodox churches were desecrated, damaged or destroyed.