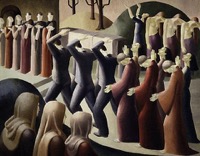 dirige (current contracted form is from c.1400), from Latin dirige "direct!" imperative of dirigere "to direct," probably from antiphon Dirige, Domine, Deus meus, in conspectu tuo viam meam, "Direct, O Lord, my God, my way in thy sight," from Psalm v:9, which opened the Matins service in the Office of the Dead. Transferred sense of "any funeral song" is from c.1500.

A brief hymn or song of lamentation and grief; it was typically composed to be performed at a funeral. In lyric poetry, a dirge tends to be shorter and less meditative than an elegy. See Christina Rossetti’s “A Dirge” and Sir Philip Sidney’s “Ring Out Your Bells.”