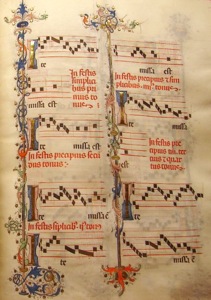 b : a metrical composition adapted for singing in a religious service

A hymn is a type of song, usually religious, specifically written for the purpose of praise, adoration or prayer, and typically addressed to a deity or deities, or to a prominent figure or personification. The word hymn derives from Greek ὕμνος (hymnos), which means "a song of praise." Collections of hymns are known as hymnals or hymnbooks.

Patristic writers began applying the term ὕμνος, or hymnus in Latin, to Christian songs of praise, and frequently used the word as a synonym for "psalm".

The meter indicates the number of syllables for the lines in each stanza of a hymn. This provides a means of marrying the hymn's text with an appropriate hymn tune for singing. In practice many hymns conform to one of a relatively small number of meters (syllable count and stress patterns). Care must be taken, however, to ensure that not only the meter of words and tune match, but also the stresses on the words in each line. Technically speaking an iambic tune, for instance, cannot be used with words of, say, trochaic meter.[1]