From Nordan Symposia
(Redirected from Distorts)
Jump to navigationJump to search 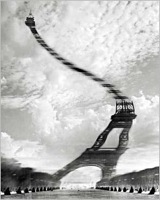 A distortion is the alteration of the original shape (or other characteristic) of an object, image, sound, waveform or other form of information or representation. Distortion is usually unwanted. In some fields, distortion is desirable, such as electric guitar (where distortion is often induced purposely with the amplifier or an electronic effect to achieve an aggressive sound where desired). The slight distortion of analog tapes and vacuum tubes is considered pleasing in certain situations. The addition of noise or other extraneous signals (hum, interference) is not considered to be distortion, though the effects of distortion are sometimes considered noise

In optics, image distortion is a divergence from rectilinear projection caused by a change in magnification with increasing distance from the optical axis of an optical system.

For lessons on the topic of Distortion, follow this link.

In cartography, a distortion is the misrepresentation of the area or shape of a feature. The Mercator projection, for example, distorts Greenland because of its high latitude, in the sense that its shape and size are not the same as those on a globe.