From Nordan Symposia
(Redirected from Dualism)
Jump to navigationJump to search 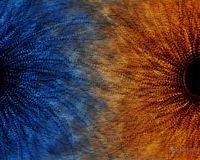 Duality, often referenced as "Dualism", denotes a state of two parts. The word's origin is the Latin duo, "two" . The term 'dualism' was originally coined to denote co-eternal binary opposition, a meaning that is preserved in general applications of metaphysical and philosophical discourse.

For lessons on the topic of Duality, follow this link.

For example, Mazdaism (Mazdaen Zoroastrianism) is both dualistic and monotheistic (but not monist) since in that philosophy God ; the Creator is purely good, and the antithesis which is also uncreated is an absolute one. Zurvanism (Zurvanite Zoroastrianism), "Manichaeism" and Mandaeism, are representative of dualistic and monist philosophies since each has a supreme and transcendental First Principle from which the two equal-but-opposite entities then emanate. This is also true for the lesser-known Christian gnostic religions, such as Bogomils, Cathars, etc. More complex forms of monist dualism also exist, for instance in Hermeticism, where Nous "thought" - that is described to have created man - brings forth both good and evil, depending on whether it receives prompting from God or from the demons.

Dualism can mean the tendency of humans to perceive and understand the world as being divided into two overarching categories. However that definition is considered controversial. In this sense, it is dualistic when one perceives a tree as a thing separate from everything surrounding it, or when one perceives a "self" that is distinct from the rest of the world. In mystic traditions such as Zen or Sufism, a key to enlightenment is "transcending" this sort of dualistic thinking, without merely substituting dualism with monism or pluralism.

The opposition and combination of the universe's two basic principles of yin and yang is a large part of Taoist religion. Some of the common associations with yang and yin, respectively, are: male and female, light and darkness, active and passive, motion and stillness. The Tai-Chi in actuality has very little to do with Western dualism; instead it represents the philosophy of balance, where two opposites co-exist in harmony and are able to transmute into each other. The Taoist religion with its dualistic concept of yin and yang is related to the religions that are both dualistic and monotheistic such as Mazdaism in the sense that the underlying force of nature, the Way, or Tao, is the First Principle which manifests itself through the dual properties of the yin and yang. In the yin-yang symbol there is a dot of yin in yang and a dot of yang in yin. This symbolizes the inter-connectedness of the opposite forces as different aspects of Tao, the First Principle. Contrast is needed to create a distinguishable reality, without which we would experience nothingness. Therefore, the independent principles of yin and yang are actually dependent on one another for each other's distinguishable existence. The complementary dualistic concept in Taoism represents the reciprocal interaction throughout nature, related to a feedback loop, where opposing forces do not exchange in opposition but instead exchange reciprocally to promote stabilization similar to homeostasis. An underlying principle in Taoism states that within every independent entity lies a part of its opposite. Within sickness lies health and vice versa. This is because all opposites are manifestations of the single Tao, and are therefore not independent from one another, but rather a variation of the same unifying force throughout all of nature.

The complementary aspects of masculine and feminine are revered by certain Neo-pagan religions as well.

In philosophy of mind

In philosophy of mind, dualism is any of a narrow variety of views about the relationship between mind and matter, which claims that mind and matter are two ontologically separate categories. In particular, mind-body dualism claims that neither the mind nor matter can be reduced to each other in any way, and thus is opposed to materialism in general, and reductive materialism in particular. Mind-body dualism can exist as substance dualism which claims that the mind and the body are composed of a distinct substance, and as property dualism which claims that there may not be a distinction in substance, but that mental and physical properties are still categorically distinct, and not reducible to each other. This type of dualism is sometimes referred to as "mind and body" and stands in contrast to philosophical monism, which views mind and matter as being ultimately the same kind of thing.

During the classical era of Buddhist philosophy in India, philosophers such as Dharmakirti argue for a dualism between states of consciousness and Buddhist atoms (the basic building blocks that make up reality), according to "the standard interpretation" of Dharmakirti's Buddhist metaphysics. Typically in Western philosophy, dualism is considered to be a dualism between mind (nonphysical) and brain (physical), which ultimately involves mind interacting with the physical brain, and therefore also interacting with the micro-particles (basic building blocks) that make up the brain tissue. Buddhist dualism, in Dharmakirti’s sense, is different in that it is not a dualism between the mind and brain, but rather between states of consciousness (nonphysical) and basic building blocks (according to the Buddhist atomism of Dharmakirti, Buddhist atoms are also nonphysical: they are unstructured points of energy). Like so many Buddhists from 600-1000 CE, Dharmakirti’s philosophy involved "mereological" nihilism, meaning that other than states of consciousness, the only things that exist are momentary quantum particles, much like the quantum particles physics]]: (quarks, electrons, etc.).

In some cultures, people (or also other beings) are believed to have two (or more) kinds of soul. In several cases, one of these souls is associated with body functions (and is sometimes thought to disappear after death), and the other one is able to leave the body (e.g. a shaman's free-soul may be held to be able to undertake a spirit journey). The plethora of soul types may be even more complex.

The Vedanta philosophy is divided into Dvaita (dualistic) and Advaita (non-dualistic) monism. Neither propose dualism in consciousness and matter. While Dvaita philosophy recognizes the differences between Jiva and Ishvara, Advaita philosophy looks at everything as Brahman which has three fundamental attributes sat-cit-ānanda (Truth-Consciousness-Bliss). Advaita vedanta insists that the experiential personal realization of unity of everything must be achieved. Until a person achieves such realization, Advaita Vedanta uses the dualism of consciousness and matter for describing the world. Dvaita, on the other hand, rejects the notion of equating Atman with Paramatman as they are different entities. Dvaita holds that upon Mukti, one enjoys the same quantity of bliss as sat-cit-ānanda but one can never be equal to Brahman.

In philosophy of science

In philosophy of science, dualism often refers to the dichotomy between the "subject" (the observer) and the "object" (the observed). Criticism of Western science may label this kind of dualism as a flaw in the nature of science itself. In part, this has something to do with potentially complicated interactions between the subject and the object, of the sort discussed in social construction literature.

A theory relating to dualism and a contemporary feminist world view is represented by Susan Bordo who contends that dualism has shaped Western culture since the time of Plato, through Augustine and René Descartes, up to the present day.

All three of these philosophers provide instructions, rules or models as to how to gain control over the body, with the ultimate aim of learning to live without it. The mind is superior to the body, and strength comes from disregarding the body's existence to reach an elevated spiritual level.

Bordo believes that the influx of various patterns of disordered eating, particularly the overwhelming rise in anorexia nervosa and bulimia nervosa, is the most telling and compelling argument that dualism is central to modern thinking. Furthermore, Western dualism is an adulterated form of historical philosophical dualism, an artificial mode of hegmonic power regulations. To cognitively and practically adopt the mode of Western dualisms is often a dangerous and oppressive way of looking at the world. For example, those who are anorexic seek to gain ultimate control, and depriving oneself of food makes one a master of one's own body, which creates a sense of purity and perfection. Again, Bordo contends that this stems from dualism, the mythological separation of the mind and body.

Ecofeminist philosopher Val Plumwood argues in Feminism and the Mastery of Nature that a logical thought process inherent in the dualistic relationship is necessary to justify exploitation and oppression of the other. The formation process of these ideologies is apparent within the five characteristics of dualisms. They are:

In recent religious and philosophical movements

In recent years, after European Imperialism, the distinction between "eastern" and "western" philosophy has been less significant than in previous times. In the wake of these changes new religious and philosophical movements have drawn freely upon many of the world's religions to attract new initiates. Dualism is often cited within these groups, along with ideas of oneness, wholeness, and theories of multiple intelligences.

In the Emin Society (printed in their archives) Dualism is presented as the Law of Two, which is said to have seven levels:

Lao-tse built directly upon the concepts of the Salem traditions when he declared Tao to be the One First Cause of all creation. Lao was a man of great spiritual vision. He taught that "man's eternal destiny was everlasting union with Tao, Supreme God and Universal King." His comprehension of ultimate causation was most discerning, for he wrote: "Unity arises out of the Absolute Tao, and from Unity there appears cosmic Duality, and from such Duality, Trinity springs forth into existence, and Trinity is the primal source of all reality." "All reality is ever in balance between the potentials and the actuals of the cosmos, and these are eternally harmonized by the spirit of divinity."[1]