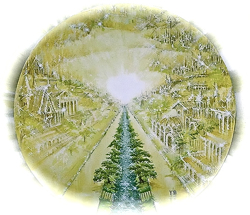 Destiny refers to a predetermined course of events. It may be conceived as a predetermined future, whether in general or of an individual. It is a concept based on the belief that there is a fixed natural order to the universe.

Different concepts of destiny and fate

For lessons on the topic of Destiny, follow this link.

A sense of destiny in its oldest human sense is in the soldier's fatalistic image of the "bullet that has your name on it" or the moment when your number "comes up," or a romance that was "meant to be." The human sense that there must be a hidden purpose in the random lottery governs the selection of Theseus to be among the youths to be sacrificed to the Minotaur. Many Greek legends and tales teach the futility of trying to outmaneuver an inexorable fate that has been correctly predicted.

Destiny may be seen as a fixed sequence of events that is inevitable and unchangeable, or that individuals choose their own destiny by choosing different paths throughout their life.

Destiny in literature and popular culture

This form of irony is important in Greek tragedy, as it is in Oedipus Rex and the Duque de Rivas' play that Verdi transformed into La Forza del Destino ("The Force of Destiny") or Thornton Wilder's The Bridge of San Luis Rey, or in Macbeth's knowledge of his own destiny, which does not preclude a horrible fate.

Other notable examples include Thomas Hardy's Tess of the D'urbervilles, in which Tess is destined to the miserable death that she is confronted with at the end of the novel; the popular short story "The Monkey's Paw" by W.W. Jacobs; and the M. Night Shyamalan film Signs. Destiny is a recurring theme in the literature of Hermann Hesse (1877-1962), including Siddhartha (1922) and his magnum opus, Das Glasperlenspiel also published as The Glass Bead Game (1943).The common theme of these works is a protagonist who cannot escape a destiny if their fate has been sealed, however hard they try. Destiny is also an important plot point in the hit TV show Lost, as well a common theme in the Roswell TV series.

Some believe that one's destiny may be ascertained by divination. In the belief systems of many cultures, one's destiny can only be learned about through a shaman, babalawo, prophet, sibyl, saint or seer. In the Shang dynasty in China, turtle bones were thrown ages before the I Ching was codified. Arrows were tossed to read destiny, from Thrace to pagan Mecca. In Yoruba traditional religion, the Ifá oracle is consulted via a string of sixteen cowries or oil-palm nuts whose pattern when thrown on to a wooden tray represents the 256 possible combinations whose named "chapters" are recited and verses interpreted for the client by the babalawo. The Ifa Divination system was added in 2005 to the UNESCO list of Masterpieces of the Oral and Intangible Heritage of Humanity.

Although the words are used interchangeably in many cases, fate and destiny can be distinguished. Modern usage defines fate as a power or agency that predetermines and orders the course of events. Fate defines events as ordered or "inevitable". Fate is used in regard to the finality of events as they have worked themselves out; and that same finality projected into the future to become the inevitability of events as they will work themselves out is Destiny. In classical and Eureopean mythology, there are three goddessess dispensing fate known as Moirae in Greek mythology, Parcae in Roman mythology, and Norns in Norse mythology, who determinted the events of the world. One word derivative of "fate" is "fatality" another "fatalism". Fate implies no choice, and ends with a death. Fate is an outcome determined by an outside agency acting upon a person or entity; but with destiny the entity is participating in achieving an outcome that is directly related to itself. Participation happens wilfully.

Used in the past tense, "destiny" and "fate" are both more interchangeable, both imply "one's lot" or fortunes, and includes the sum of events leading up to a currently achieved outcome (e.g. "it was her destiny to be leader" and "it was her fate to be leader").

Fortune and Destiny (Gad (deity] and Meni) appear as gods in Isaiah 65:11 "But you who forsake the LORD, who forget my holy mountain, who set a table for Fortune and fill cups of mixed wine for Destiny"

The word "Kismet" (alt., rarely, "Kismat") derives from the Arabic word "qismah", and entered the English language via the Turkish word "qismet" meaning either "the will\save Allah" or "portion, lot or fate". In English, the word is synonymous with "Fate" or "Destiny".

The improbability of infinite destiny attainment does not in the least prevent the entertainment of ideas about such destiny, and we do not hesitate to say that, if the three absolute potentials could ever become completely actualized, it would be possible to conceive of the final integration of total reality. This developmental realization is predicated on the completed actualization of the Unqualified, Universal, and Deity Absolutes, the three potentialities whose union constitutes the latency of the I AM, the suspended realities of eternity, the abeyant possibilities of all futurity, and more.

Such eventualities are rather remote to say the least; nevertheless, in the mechanisms, personalities, and associations of the three Trinities we believe we detect the theoretical possibility of the reuniting of the seven absolute phases of the Father-I AM. And this brings us face to face with the concept of the threefold Trinity encompassing the Paradise Trinity of existential status and the two subsequently appearing Trinities of experiential nature and origin.[1]