From Nordan Symposia
(Redirected from Ecstacy)
Jump to navigationJump to search 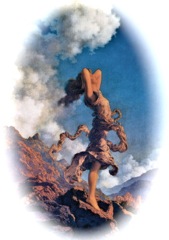 Ecstasy is subjective experience of total involvement of the subject, with an object of his or her awareness. Because total involvement with an object of our interest is not our ordinary experience since we are ordinarily aware also of other objects, the ecstasy is an example of altered state of consciousness characterized by diminished awareness of other objects or total lack of the awareness of surroundings and everything around the object. For instance, if one is concentrating on a physical task, then one might cease to be aware of any intellectual thoughts. On the other hand, making a spirit journey in an ecstatic trance involves the cessation of voluntary bodily movement.

For the duration of the ecstasy the ecstatic is out of touch with ordinary life and is capable neither of communication with other people nor of undertaking normal actions. Although the experience is usually brief in physical time (from momentary to about half an hour), there are records of such experiences lasting several days or even more, and of recurring experiences of ecstasy during one's lifetime. Subjective perception of time, space and/or self may strongly change or disappear during ecstasy. The word is often used in mild sense, to refer to any heightened state of consciousness or intense pleasant experience. It is also used more specifically to denote states of awareness of non-ordinary mental spaces, which may be perceived as spiritual (the latter type of ecstasy often takes the form of religious ecstasy). Some religious people hold the view that true religious ecstasy occurs only in context of their religion (e.g. as a gift from the deity whom they worship) and it cannot be induced by natural means (human activities). They consider ecstasy as a way of contacting with the divine and usually value the experience as highly desirable.

Ecstasy can be deliberately induced using religious or creative activities, meditation, music, dancing, breathing exercises, physical exercise, sex or consumption of psychotropic drugs. The particular technique that an individual uses to induce ecstasy is usually also associated with that individual's particular religious and cultural traditions. Sometimes an ecstatic experience takes place due to occasional contact with something or somebody perceived as extremely beautiful or holy, or without any known reason. "In some cases, a person might obtain an ecstatic experience "by mistake". Maybe the person unintentionally triggers one of the, probably many, physiological mechanisms through which such an experience can be reached. In such cases, it is not rare to find that the person later, by reading, looks for an interpretation and maybe finds it within a tradition."[1].

People interpret the experience afterward according to their culture and beliefs (as a revelation from God, a trip to the world of spirits or a psychotic episode. "When a person is using an ecstasy technique, he usually does so within a tradition. When he reaches an experience, a traditional interpretation of it already exists."[2]. The experience together with its subsequent interpretation may strongly and permanently change the value system and the worldview of the subject (e.g. to cause religious conversion).

In 1925, James Leuba wrote: "Among most uncivilized populations, as among civilized peoples, certain ecstatic conditions are regarded as divine possession or as union with the Divine. These states are induced by means of drugs, by physical excitement, or by psychical means. But, however produced and at whatever level of culture they may be found, they possess certain common features which suggest even to the superficial observer some profound connection. Always described as delightful beyond expression, these ecstatic experiences end commonly in mental quiescence or even in total unconsciousness." He prepares his readers "... to recognize a continuity of impulse, of purpose, of form and of result between the ecstatic intoxication of the savage and the absorption in God of the Christian mystic."

"In everyday language, the word 'ecstasy' denotes an intense, euphoric experience. For obvious reasons, it is rarely used in a scientific context; it is a concept that is extremely hard to define."Kaj Björkqvist, "Ecstasy from a Physiological Point of View".

"Religious ecstasy is permissible when resulting from sane antecedents, but such experiences are more often the outgrowth of purely emotional influences than a manifestation of deep spiritual character. Religious persons must not regard every vivid psychologic presentiment and every intense emotional experience as a divine revelation or a spiritual communication. Genuine spiritual ecstasy is usually associated with great outward calmness and almost perfect emotional control. " [3]