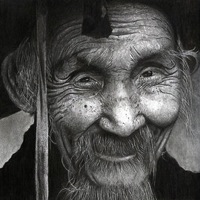 Old age consists of ages nearing or surpassing the average life span of human beings, and thus the end of the human life cycle. Euphemisms and terms for old people include seniors (American usage), senior citizens (British and American usage) and the elderly.

Old people have limited regenerative abilities and are more prone to disease, syndromes, and sickness than younger adults. For the biology of ageing, see senescence. The medical study of the aging process is gerontology, and the study of diseases that afflict the elderly is geriatrics.

For lessons on the related topic of Ageing, follow this link.

The boundary between middle age and old age cannot be defined exactly because it does not have the same meaning in all societies. People can be considered old because of certain changes in their activities or social roles. Examples: people may be considered old when they become grandparents, or when they begin to do less or different work—retirement.

German chancellor Otto von Bismarck created the world's first comprehensive government social safety net in the 1880s, providing for old age pensions and setting 60 as the age of retirement. The fixed retirement age of 70 was the first attempt at defining the start of old age. In the United States of America, and the United Kingdom, the age of 65 was traditionally considered the beginning of the senior years because, until recently, United States and British people became eligible to retire at this age with full Social Security benefits. In 2003, the age at which a US citizen became eligible for full Social Security benefits began to increase gradually, and will continue to do so until it reaches 67 in 2027. As of 2011, the age is 50. The original raison d'etre behind old age pensions was to prevent poverty and elderly persons from being reduced to beggary, which is still common in some underdeveloped countries, but growing life expectancies and elder populations has brought into question the model under which pension systems were originally designed.